CARACAS (Reuters) – Ecuador said on Friday it is holding a programmer linked to WikiLeaks founder Julian Assange in custody pending possible charges of interfering in private communications, a day after ending Assange’s seven-year asylum in its London embassy.

Interior Minister Maria Paula Romo said prosecutors could file charges against Ola Bini, who she said lives in Ecuador and had visited Assange in the London embassy a dozen times.

President Lenin Moreno in recent weeks had accused WikiLeaks and Assange of violating his privacy by publishing family photos of him. WikiLeaks denies the accusation, and says Moreno was trying to stifle reporting of corruption allegations against him.

“He is detained for the purposes of investigation. This is a detention that took place in recent hours, ordered by judges of course, and requested by state prosecutors,” Romo said in televised comments. “This person is very close to WikiLeaks.”

Romo, who on Thursday had announced the detention of an unidentified individual, did not provide further details.

On his website, Bini describes himself as a software developer who works for the Quito-based Center for Digital Autonomy, which focuses on digital privacy and security. The site does not mention WikiLeaks.

Bini and the Center for Digital Autonomy did not immediately respond to emails seeking comment.

Romo said the government had information that Bini had travelled on several occasions with Ricardo Patino, who was Ecuador Foreign Minister when Assange was granted asylum in 2012 during the government of former President Rafael Correa.

Patino via Twitter said he does not know Bini.

Romo said two Russian citizens were also under investigation but had not been arrested.

Moreno’s government accused WikiLeaks of being behind an anonymous website that said Moreno’s brother had created offshore companies that his family used to fund a luxurious lifestyle in Europe while Moreno was a delegate to a United Nations agency.

Moreno, who was Correa’s vice president but fell out with him after taking office in 2017, denies wrongdoing. 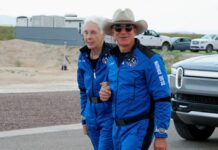