CAIRO (Reuters) – Hundreds of thousands of protesters joined a sit-in outside Sudan’s defence ministry on Thursday to press the ruling military council to hand over power to a civilian government.

The huge crowd was answering a call by an alliance of activists and opposition groups to join a protest march through Khartoum.

The Declaration of Freedom and Change Forces (DFCF) alliance said on Thursday it had submitted a draft constitutional document containing its vision for the transitional period to the Transitional Military Council (TMC).

Protesters and activists have been negotiating with the TMC to form a joint civilian-military body to oversee the period following the forced departure of long-term president Omar al-Bashir.

Opposition groups say the ruling council must be civilian-led and have promised to maintain a sit-in outside the Defence Ministry until their demands are met, but the TMC has shown no sign of willingness to relinquish ultimate authority.

People came from a number of different provinces to join the march, a Reuters witness said.

At a televised news conference, a spokesman for the DFCF said it expected a response from the military to its draft constitutional draft within two or three days.

Republicans agree on sweeping changes in US tax system 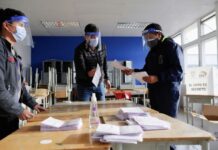