(Reuters) – Cristiano Ronaldo’s 20th goal for Juventus helped the Italian champions restore an 11-point lead in Serie A with a 3-0 win at Sassuolo on Sunday.

The Portuguese rose to head in a corner after 70 minutes, his 18th league goal and one that means he has now scored at least 20 times in all competitions in each of the last 13 seasons representing Juve, Real Madrid and Manchester United.

Juventus dropped points for just the third time this season when they were held by Parma last weekend to allow second-placed Napoli to reduce the gap to nine points.

But Massimiliano Allegri’s side re-established a comfortable advantage with victory at the Mapei Stadium after Napoli drew with Fiorentina on Saturday.

The home side started brightly as Filip Djuricic raced clear only for Wojciech Szczesny to get a hand on the ball as the forward attempted to go around him, and the Pole was called into action again when he palmed away Manuel Locatelli’s shot from distance.

Sassuolo goalkeeper Andrea Consigli’s sloppy clearance was punished after 23 minutes when Ronaldo pounced on the loose ball and fired a powerful shot at goal which was parried, only for Sami Khedira to knock in the rebound.

Ronaldo then had a neat finish disallowed for offside before Szczesny took a poor touch near the centre circle to offer Domenico Berardi a clear sight of goal, but the Italy international’s long-range effort was just wide of an unguarded net.

Ronaldo, who leads the Serie A scoring charts, doubled his side’s lead by nodding in from six yards and Emre Can came off the substitute’s bench to finish off a flowing team move with a low finish four minutes from time.

The result leaves unbeaten Juventus on top with 63 points from 23 matches, while Sassuolo remain 11th on 30 points. 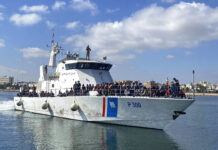