LUXOR, Egypt (Reuters) – A century after the tomb of Tutankhamun was discovered, revealing the mummified boy-king buried more than 3,000 years ago, it has re-opened, brighter and safer thanks to painstaking work to repair damage caused by dust, damp and visitors.

The intricate frescoes on the walls and ceiling were also restored to the pristine state they were in when British archaeologist Howard Carter first entered the tomb in 1922.

In a process that took 10 years and was delayed by political upheaval in 2011 when protests forced Hosni Mubarak from power, wooden flooring, lighting and ramps inside the tomb were all replaced: and that meant Tutankhamun himself had to be moved.

“It is an incredibly precious object, so it was a very stressful time to safely move the mummy,” said Neville Agnew, communications director of the Los Angeles-based Getty Conservation Institute, which led the work.

“It was terrifying,” he said of the operation to lift the mummy and its 250 kg (550-pound) case and carry it from the tomb by hand.

“Twelve men, chanting and carrying it up the ramp. I said: if one slips, it will slide and will kill somebody. They said: ‘Don’t worry’.”

The ancient site in the Valley of the Kings had been renovated several times before, but perhaps never with this rigour.

“The water vapour produced by visitors’ breathing affected everything in the tomb,” said Hussein Shaboury, an arts professor at Alexandria University, adding that it had also been hard to breathe there.

“We had to change this and create a method by which fresh air enters the tomb, and air is circulated in a way where all the air in the tomb is changed in 30 minutes.” 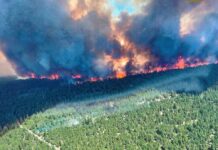 Deaths surge in U.S. and Canada from worst heatwave on record

﻿Migrant families being flown to San Diego from Texas in U.S....