KYIV: Ukraine’s president Volodymyr Zelensky said today 130 people had been saved after the bombing of a theatre in the port city of Mariupol under Russian siege, but “hundreds” were still trapped in rubble.

“More than 130 people have been saved. But hundreds of Mariupol residents are still beneath the rubble,” Zelensky said in a video address on Facebook.

He promised to continue rescue operations in Mariupol “despite shelling” in the southern city that has suffered vast destruction.

Ukraine accused Russia of hitting the theatre Wednesday, though Moscow denied this.

Ukraine’s ombudsman Lyudmyla Denisova earlier said a bomb shelter underneath the Drama Theatre had survived the impact, and some “adults and children” had emerged alive.

It had been feared that up to 1,000 people may have been taking refuge underground at the time of the blast.

Days before the apparent attack, satellite images shared by private company Maxar, clearly showed the word “DETI” – or “children” in Russian – written on the ground on either side of the building.

The Russian army today said they were fighting in the city centre of Mariupol.

Zelensky said western weapon deliveries to the country were too slow.

“We again remind certain western leaders that it will be a moral defeat for them … if Ukraine does not receive advanced weapons,” he said.

He repeated calls for European ports to deny entry to all Russian ships and criticised some western firms for not leaving Russia after it invaded Ukraine on Feb 24.

“All western companies must leave the Russian market,” he said. 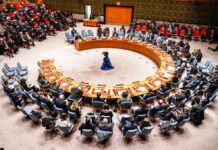