South Korea’s spy agency told lawmakers Monday that North Korea has punished two of its top military officers, including one widely seen as its second-most powerful official, during a highly unusual inspection of the military’s powerful political bureau.

According to a lawmaker who attended the closed-door briefing by the National Intelligence Service, it said the inspection of the North Korean military’s General Political Bureau was the first of its kind in 20 years and occurred because of its “impure” attitude, which it did not describe.

The spy agency said it obtained intelligence that the head of the bureau, Vice Marshal Hwang Pyong So, his top deputy, Kim Wong Hong, and other officers were punished, according to the lawmaker, Kim Byung-kee.

Hwang’s position as the military’s top political officer made him North Korea’s second most powerful official after leader Kim Jong Un, according to many South Korean analysts. If he were to be removed, it could lead to a major shift in North Korea’s secretive hierarchy of power.

It was unclear whether Hwang was verbally reprimanded, dismissed or banished to a rural area. The spy agency, which has a spotty record in reporting developments in North Korea, said it couldn’t publicly confirm Kim’s account of the briefing.

The report came as North Korea is struggling to head off international sanctions that were toughened after its sixth and biggest nuclear test in September.

Since taking office in late 2011, Kim Jong Un has orchestrated a series of high-profile purges, dismissals and executions in what foreign experts say is an attempt to bolster his grip on power and remove anyone seen as a challenge to his leadership.

Hwang was last mentioned in a North Korean state media dispatch on Oct. 13 that reported his attendance at an event marking the anniversary of a revolutionary school.

Kim Won Hong once headed North Korea’s state security ministry, and the South Korean government said in February that he had been fired from that post, presumably because of corruption, abuse of power and torture committed by his ministry.

The South Korean spy agency told the lawmakers that the North Korean investigation of the military political bureau is continuing, and is spearheaded by senior Workers’ Party official Choe Ryong Hae, who was the military’s top political officer before Hwang. 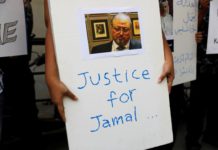 How the man behind Khashoggi murder ran the killing via Skype