Kathmandu, Oct. 22: The government has administered more than 43 per cent of the target population against COVID-19 with a single shot.
According to the Ministry of Health and Population (MoHP), 8, 581,195 people (43.1 per cent population) were vaccinated with single shot and 6,500,463 (32.6 percent) with full dose across the nation as of today.

As per the MoHP update, in total, 23,568 doses of vaccines were administered in the last 24 hours.
The MoHP on Thursday confirmed 545 new cases of COVID-19, of which 470 were detected through PCR tests and 75 through antigen tests.
The nationwide COVID-19 tally through PCR method reached 807,522 and that through antigen reached 93,771.

Of the total 8,549 tests conducted in the last 24 hours, 6,586 were Real-Time Polymerase Chain Reaction (RT-PCR) while 1,963 were antigen tests.
According to the MoHP, the Kathmandu Valley recorded 214 new infections over that period. Of these, 147 cases were confirmed in Kathmandu, 51 in Lalitpur and 16 in Bhaktapur.
According to the MoHP data, four districts, including Kathmandu, Bhaktapur, Lalitpur and Kaski, have more than 500 active cases each. Similarly, Mustang and Mugu districts have zero active cases and 15 other districts have more than 200 active cases each.

The active caseload further declined to 11,315 on Thursday. Earlier, the figure was 11,579 on Wednesday. Meanwhile, 726 COVID-19 patients recovered from the infection during that period. Nepal has now recorded 784,881 cases of recovery, with recovery rate standing at 97.2 per cent. The country also reported eight deaths related to the disease over that period, taking the death toll to 11,326. The death rate now stands at 1.4 per cent.

Dr. Bibek Kumar Lal, Director at the Family Welfare Division, under the Department of Health Services, said that those Pfizer vaccines would be administered to people who have critical health problem. After receiving the vaccines, they will be supplied to major hospitals of the country, he added. 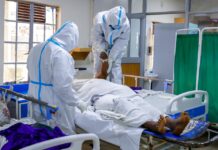 UN says half of global population without any social protections