WASHINGTON: A helicopter crashed onto a road in a rural area of the US state of West Virginia yesterday evening, authorities said, with local media outlets reporting that six people on board were killed.

The office of emergency management in Logan County, where the Bell UH-1B helicopter went down, said in a Facebook post that Route 17 in the area had been closed due to the crash, while the national transportation safety board tweeted it was sending a team of investigators to the site.

Ray Bryant, chief of operations for the Logan emergency ambulance authority, told local television station WSAZ that six people aboard the helicopter were killed when it went down, though the cause of the accident had not been determined.

The helicopter, which was based at a nearby airport and used for tourist flights, was in flames when rescuers arrived, he added.

Local resident Bobbi Childs, who lived near the crash site, told WSAZ she called emergency services and then rushed to the scene, only to find the helicopter ablaze.

“I ran as fast as I could go … and I went up to the helicopter, but the fire was just so hot, so intense,” she said.

West Virginia governor Jim Justice said in a tweet that he and his wife were “praying for the families of those killed in this tragic helicopter crash”.

The Bell UH-1B, nicknamed the “Huey”, was developed in the 1950s and widely used by the US military during the Vietnam War. 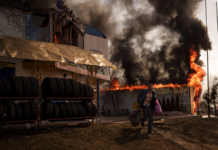 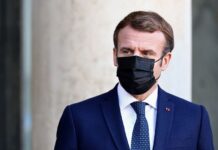 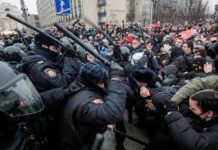 Police crack down on Russian protests against jailing of Kremlin foe...