ISLAMABAD: At least six Pakistani soldiers were killed today in an attack on their base in the country’s northwest claimed by the local version of the Taliban, the military said.

The attack in the city of Tank was claimed by Tehreek-e-Taliban Pakistan (TTP), a separate movement that shares common roots with the militants that took power in Afghanistan last year.

In a statement, the TTP claimed to have killed or wounded more than 30 soldiers.

The militants often exaggerate their gains, while the military’s public relations department also plays down losses or delays reporting them. 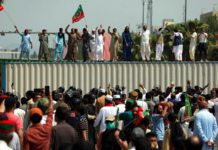 Pakistan to go to polls after PM foils sacking attempt