BALTIMORE (Reuters) – When U.S. Vice President Mike Pence and President Donald Trump greeted supporters at an outdoor venue on Wednesday night for the Republican National Convention, there were few masks in sight – and Pence exchanged at least one handshake.

The scene provided a stark contrast to last week’s nearly all-virtual Democratic convention, when Joe Biden and Kamala Harris scrapped plans to travel to Wisconsin because of the coronavirus and instead delivered speeches in a mostly empty event center.

Biden and Harris wore masks and kept a distance from the crowd they joined in watching outdoor fireworks in Delaware at the end of their convention.

While the Democratic candidates have eschewed large crowds and donned masks in public, Trump took months to embrace mask-wearing as an effective way to stop the spread of the virus, which has killed more than 179,000 people in the United States.

On Wednesday night, few people who had gathered for Pence’s convention speech at the Fort McHenry National Monument in Baltimore, Maryland, wore masks. Neither did Trump, his wife Melania, or Pence and his wife Karen, when they greeted well-wishers at the event’s conclusion.

Members of the audience told reporters on Wednesday night they had not been tested for the infection before attending. Even so, Pence shook hands with one woman.

Medical professionals at the White House and around the country have encouraged Americans to maintain a social distance, wear masks and wash their hands regularly to thwart COVID-19.

Trump and Pence are tested regularly for the coronavirus, as are staff and journalists who interact with them at the White House.

Both men have sought to paint an optimistic picture about the pandemic despite its deadly toll. Trump, 74, has criticized Biden, 77, for campaigning from his home in Delaware rather than venturing out regularly to in-person events around the country.

Trump, who is trailing the former vice president in opinion polls ahead of the Nov. 3 election, is expected to travel extensively in the coming weeks.

Harris on Wednesday criticized the Republican president for politicizing the pandemic.

A large crowd is expected to attend Trump’s convention speech from the White House South Lawn on Thursday night. 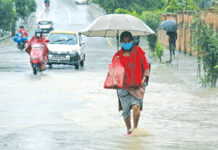