MADRID (Reuters) – Greeted by a group of singing young activists and the massed ranks of the world’s media, Swedish teenager Greta Thunberg arrived at the U.N. climate summit in Madrid on Friday, having taken a catamaran, train and electric car to reach the venue.

The quietly spoken 16-year-old, who has become the global face of public anger over climate change, has already emerged as the star of the two-week talks, even before addressing the gathering.

She harangued delegates at the last U.N. climate event in September, demanding: “How dare you?” and declaring, “You have stolen my dreams.”

In just over a year, Thunberg has inspired younger protesters in a global movement demanding action to slow the atmospheric warming that climate scientists say could ultimately endanger the survival of industrial societies.

Arriving in a small electric car at the conference venue, a series of hangar-like halls near Madrid’s international airport, Thunberg met with a group of young climate activists, who held hands as they sang a chorus of “Fight for Climate Justice”.

The Swede reached Chamartin train station in the Spanish capital on the night train Lusitania, completing a low-carbon expedition, including a 21-day catamaran voyage across the Atlantic, to reach the conference, originally planned in Santiago, Chile.

Thunberg was again mobbed by a crowd of reporters but did not speak as she left the train, instead tweeting later: “I successfully managed to sneak into Madrid this morning! I don’t think anyone saw me … Anyway it’s great to be in Spain!”

The annual summit opened on Monday with a call from U.N. chief Antonio Guterres not to be the “generation … that fiddled while the planet burned”. [L8N28C1WG]

Thunberg is due to take part in a mass march and make a speech later in Madrid.

By this meeting’s close on Dec. 13, negotiators hope to resolve remaining disagreements on how to implement an accord struck in Paris in 2015 to limit a rise in global temperatures to between 1.5 and 2 degrees Celsius over pre-industrial levels.

They saved the deal from disintegrating last year by agreeing guidelines for putting it into effect, but current pledges fall well short of the temperature target and sticking points remain among signatories. 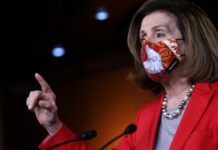 German doctors say Navalny is in a fit state to fly:...

Not without India: World’s pharmacy gears up for vaccine race

Trump, in wave of Tuesday pardons, so far not planning to...