Kathmandu, May 14: Top leaders of all political parties in an all-party meeting on Wednesday expressed their commitment to stand together with the government to establishment Nepal’s sovereignty in the Nepali territory of Kalapani , which has been occupied by the Indian security forces since 1962.
During the all party meeting called by Prime Minister KP Sharma Oli, the leaders discussed the issue of border encroachment by India in Lipulek and ways to resolves the issue.
The leaders of the parties representing the Parliament, former prime ministers and chair of Constituent Assembly and ministers vowed to support the government to get back Nepali territory.
India has recently constructed a strategic road connecting the Lipulek pass, a Nepal-China border point which has long been encroached by the southern neighbour.
Briefing the media after the meeting at PM’s residence in Baluwatar, Minister for Foreign Affairs Pradeep Kumar Gyawali said all representatives suggested the government to settle the border dispute through diplomatic and political dialogues.
They also asked the government to move ahead along with its citizens because this issue could be resolved only with the support and solidarity of its people, said Minister Gyawali.
Minister Gyawali said after hearing the suggestions, PM Oli expressed his gratitude towards the support of the all parties and expect the same in the future.
PM Oli said, “Our ancestors have built and protected the country with their sacrifices and through wars. And this is our duty to protect the country by strongly standing for the past achievements made by our ancestors.”
Stressing that Nepal always wants India to be its good friend PM Oli said that but more than that protecting its territory and wellbeing would be top priority. “ For this, we want to hold diplomatic dialogues as soon as possible.”
Answering the query of journalists, Minister Gyawali said after the India issued its political map in November, 2019, the Government of Nepal had been asking India to hold the secretary-level meeting of the two countries, which had not happened till date.

Showing the reason of Coronavirus, India had delayed the meeting, said Minister Gyawali adding that the Indian government itself has admitted that Kalapani region was a disputed territory between Nepal and India and had expressed its commitment to resolve the issue through diplomatic dialogues.
Though Nepal is trying to settle the issue of the disputed land of Kalapani, the later has developed a road through Nepali territory, he said.
“But if the corona crisis could withhold diplomatic meeting to resolve the dispute, then how they could construct the road in the time of Corona crisis,” he asked.
This unilateral act is against the understanding reached between the two countries including at the level of Prime Ministers that a solution to boundary issues would be sought through negotiation. This is unacceptable, he added.
He further added that the government is ready to hold meeting of all kinds, either of the Prime Ministerial level, secretary-level, formal or even informal level. “Because, the more we will delay the dialogue, the more problem will be created within the relation between the two countries.”
Admitting that there was no presence of Nepali administration in the Indian occupied land of Mahakali, Minister Gyawali said to make the administrative presence of Nepal government in the region, the government has set up a camp of the Armed Police Force in the region. “After the bilateral meeting we will soon make the presence of the government in the region. The land that belongs to our country will remain ours.”
Furthermore, the government has already forwarded the work of road construction to connect all its territory, he said.
The Government of Nepal has consistently maintained that as per the Sugauli Treaty (1816), all the territories east of Kali (Mahakali) River, including Limpiyadhura, Kalapani and LipuLek, belong to Nepal, he said. The Mahakali is a river of Nepal.
The Sughauli treaty has only talked about the Kali River, not of any canals and as per the article 5 of the treaty, Mahakali River is Nepal’s southern border.
It was reiterated by the Government of Nepal several times in the past and most recently through a diplomatic note addressed to the Government of India dated 20 November 2019 in response to the new political map issued by the latter, said Minister Gyawali.
Refuting the media reports about the diplomatic note, he asked to believe only the official statement. , FM Gyawali said the diplomatic noted was handed over to Indian Ambassador by Nepal government expressing its disagreement over the road construction by the Indian government in Nepali territory.
In November 2019, the Indian government had published its political map showing Kalapani areas as its territory. In the meeting, Nepali Congress president Sher Bahadur Deuba said that the historical fact established by the Sugauli Treaty of 1816 that the Mahakali River was the western border of Nepal could be the basis for resolving the present border issues.
Therefore, all lands including Lipulek, Limpiyadhura and Kalapani that lie east of the Kali River are Nepal’s territory, he said, adding that the Nepali Congress was always clear about it and was playing its role accordingly. He reiterated that the Indian force should vacate the Nepali territory and Nepal should establish her sovereignty in the land.
He also recalled that the government led by late Sushil Koirala had sent a ‘protest note’ to the governments of both India and China after they inked an agreement on Lipulek in Beijing in 2015.
“Today the road in Lipulek was built according to the Beijing agreement of 2015, and Nepal should hold talks with both India and China on the issue,” he said. “Lipulek, Limpiyadhura and Kalapani are Nepali territory, we outright reject any encroachment to these lands.”
He also said that his party had strongly opposed the map that India made public in November last year, showing the Nepali territory of Kalapani, Lipulek and Limpiyadhura in India.
Recalling the party’s stance in the all-party meeting of November 2019 on the same issue, former Prime Minister Deuba said that NC would always stand with the government to resolve the border issue through high level diplomatic and political initiatives. He also urged the government to initiate result-oriented diplomatic and political measures to resolve the crisis instead of wasting time in issuing one statement after another.
— 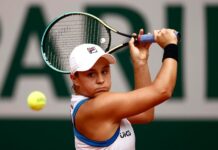 Tennis-World number one Barty retires from French Open with injury