LOS ANGELES: An Arctic blast gripped much of the northeastern US yesterday with bitter cold and sub-zero wind chill factors, prompting numerous school districts across the region, including Boston, to cancel classes for the day.

The frosty air mass sweeping New England brought single-digit temperatures to most of Massachusetts, with the added chill from winds making it feel as cold as -18°C and below “for just about everyone”, the National Weather Service (NWS) said.

“If you must go outside today, be sure to dress in extra layers!” the NWS office in Boston tweeted.

Anticipated transportation delays due to Covid-19-related driver shortages was also a factor in the decision to shutter Worcester schools, to avoid leaving schoolchildren waiting at bus stops for too long, the district tweeted.

Classes were likewise cancelled for all students in Syracuse, New York; Manchester, New Hampshire; and Burlington, Vermont, all citing extreme cold for their closures.

In Rhode Island, the state Emergency Management Agency announced public warming centres would be opened on Tuesday in 33 communities for those who need to seek temporary shelter from dangerously low temperatures.

A warmer air mass was expected to move into the northeast as early as today, substantially easing the region’s chill, the NWS forecast.

Across the country, heavy rains soaked western Washington state yesterday in the latest “atmospheric river” to drench the Pacific Northwest as a low-pressure area funnels a stream of moisture into the Olympic Peninsula and Cascades through today, the NWS said.

Flood watches were posted for much of the Puget Sound region around Seattle, an area already saturated from torrential downpours and flooding last week, with the NWS warning of the possibility of renewed landslides as well. Spain down Crotia in epic match to reach last 8 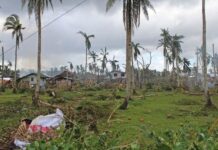