Most of us think we know what ageing looks and feels like.

It announces itself with wrinkled skin and gray, thinning hair. It blurs vision, makes joints creaky, and if not rigorously countered, causes things to sag.

But scientists are cataloging far subtler signs of biological ageing, evident long before hair is lost and skin starts to crinkle.

It’s a story told not just in the body’s organs but in its genes, cells and proteins – even in the bacteria that colonise us.

First, one or two molecular processes fall out of whack. Those failures send broader functions off kilter. Sometimes all at once, sometimes gradually, our organs suffer and entire networks – the immune system, for instance – begin to falter.

Understanding how all this happens could allow us to live longer someday. But a nearer goal might produce an even bigger payoff: Defining what ageing is and exactly how it progresses may enable us to stay healthy for more of our lives.

Both identify biomarkers that help define what it means, at a microscopic level, to age. Both zero in on mechanisms prone to break down as we age – in other words, targets for therapies that could disrupt or delay the ageing process.

And both offer some guideposts to measure the effectiveness of elixirs that promise to be (but rarely are) fountains of youth.

In one of the new studies, Stanford University researchers combed through 18 million data points collected from 106 people who were monitored for two to four years. The aim was to detect patterns common to all as we age as well as patterns that vary from person to person.

Emerging from that study, published recently in the journal Nature Medicine, is the idea that individuals age along at least four biological “pathways.”

While one person may be most prone to decline in the function of his kidneys, another may experience the most age-related degradation in the liver, the immune system or in metabolic function, the findings suggest.

Most of us likely age along some or all those fronts, if not more, said Stanford geneticist Michael Snyder, who led the research.

But classifying people by their personal “ageing style,” or areas of greatest vulnerability, may help them identify and forestall their most likely depredations of ageing, he said.

In the second study, scientists from the Buck Institute for Research on Aging profiled the known universe of tissues and cells that can reveal the biological age of the human body. It made use of data collected as part of a study that has tracked 3,200 volunteers over the course of their adult lives since 1958.

That atlas of ageing’s biomarkers will speed efforts to find and develop drugs that could slow biological ageing, said University of Southern California biochemist Judith Campisi, who led the work published this week in the journal PLOS Biology.

One day, she added, it may allow doctors to give their patients “a clear read-out of how well, or poorly, their various tissues and organs are ageing.”

After centuries of snake oil and hucksterism, the struggle against ageing has gotten real in recent years.

Scientists have honed in on “senescent” cells, which stop dividing under stress, as a key driver of conditions such as cancer, heart disease, diabetes, arthritis and dementia.

Since these diseases are more common as we get older, they and their root causes have become central to scientists’ understanding of ageing.

Researchers increasingly suspect that when you disrupt the development of one disease of ageing, you may help protect against others – a principle called the “unitary theory of fundamental ageing processes.”

If, for instance, senescent cells and the inflammation they trigger could be brought under control, perhaps many age-related diseases – indeed, unhealthy ageing itself – could be averted and the experience of ageing might be far less miserable.

That’s the idea behind the search for “senolytics” – drugs or therapies that could remove or disrupt the action of senescent cells. If such anti-ageing drugs are to be developed and used safely, researchers will need to recognise the many forms that senescent cells take, and to measure what happens when different members of that group are removed or suppressed.

In the Stanford University study, researchers sequenced genes; analysed blood, urine and saliva samples; and probed the microbes in the guts and noses of 43 people.

The team found 608 molecules that could be assessed and used to identify likely contributors to age-related problems.

The Stanford team came up with four “ageotypes” based on these biomarkers and how they shifted over time. While the list is likely to expand with further research, the authors suggest that people tend to age most along one of four distinct biological pathways: metabolic, immune, hepatic (or liver) and nephrotic (or kidney).

A person whose dominant ageotype is metabolic might see her A1C, a measure of blood sugar levels, rise with age, potentially leading to Type 2 diabetes.

A person with an immune ageotype, on the other hand, might experience increased inflammation across the body, making her more vulnerable to a heart attack and certain cancers.

The work is highly preliminary.

Dr Zoltan Arany who studies ageing processes at the University of Pennsylvania’s Perelman School of Medicine, said that while it probed a very wide range of measures and looked for changes over time, determining whether they actually cause ageing or are innocent bystanders of the process “will require a lot of further work.”

Even after scientists have established the common roots of age-related diseases – a task that is far from complete – there’s still hard work ahead, said Dr James L. Kirkland, who studies ageing at the Mayo Clinic.

If studies like the two published are to help humans age better, they’ll have to explain why we age so differently, and predict which of many routes each of us will take.

“At the moment, we’re measuring everything,” Dr Kirkpatrick said. “But the effort will be to narrow down, to get a composite score of biomarkers, that is predictive of a future decline in healthspan.”

“I can envision a world in which everyone gets their ageotype measured, so that at the earliest sign of acceleration, you can intervene,” he said. For some, that may be taking a cholesterol-lowering statin, and for others, it may mean exercising more.

“This can give you an earlier kick in the butt to address those vulnerabilities,” he said. — Tribune News Service 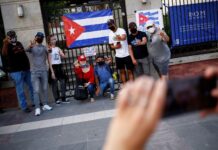 U.S warns Cubans away from sea crossings amid protests, but most...