LONDON (Reuters) – Arsenal came out on top in the north London derby on Sunday, sinking rivals Tottenham Hotspur 4-2 in a scintillating match at the Emirates and leapfrogging them to go fourth in the Premier League table.

A brace from Gabonese striker Pierre-Emerick Aubameyang and strikes from Alexandre Lacazette and Lucas Torreira helped to overhaul goals from Eric Dier and Harry Kane, who notched up his eighth in eight derbies.

Aubameyang gave the home side the lead from the penalty spot in the 10th minute after a clumsy handball by Spurs’ Jan Vertonghen, who flung up his arm to knock a corner kick off course and prevent Shkodran Mustafi from heading the ball goalwards.

Tottenham flipped the match on its head within the half with goals from Dier and Kane, the former heading in from a Christian Eriksen free kick and Kane scoring from the spot after Son Heung-min was judged to have been brought down in the area.

Aubameyang levelled again in the 56th minute before second-half substitute Lacazette put Arsenal ahead with a deflected strike from outside the area.

Arsenal, unbeaten in 19 games in all competitions, moved above Spurs into fourth place in the league on goal difference, with both teams on 30 points.

“The best day is when I signed here,” Arsenal manager Unai Emery said. “This was a very big victory, we give our supporters this victory because it’s a special match for them.

“We need to continue in our process. Today, for our confidence, was a big match.”

OZIL MISSING WITH BACK PROBLEM

Emery left Mesut Ozil out of the Arsenal squad with a back spasm but that did not disrupt Arsenal’s flow early on and they started the match at a blistering pace.

The hosts created several openings before Aubameyang was gifted the opportunity to break the deadlock from the spot, which he converted in style, sending Lloris the wrong way.

Dier’s goal celebrations sparked angry scenes on the touchline, with Arsenal’s substitutes unhappy with the England midfielder, but things soon got worse for Arsenal after Rob Holding needlessly brought down Son in the box.

Kane stepped up to coolly give Tottenham the advantage at the break, meaning Arsenal continued the remarkable run of not having held a halftime lead in the Premier League so far this season.

Aubameyang’s 10th goal of the season — taking him two clear of his nearest rival in the Premier League scoring charts — was right out of the top drawer, arrowing the strike past Lloris.

“I think we started the second half very well and until they scored the third goal it was an even game,” Tottenham manager Mauricio Pochettino said.

“When we conceded a third goal it was tough for us to come back mentally, to find the energy to go and try to be again in the game.”

Vertonghen’s red card worsened a miserable afternoon for Spurs, who failed to build on their excellent display against Chelsea last weekend, meaning their eight-year run without a win at Arsenal continues. 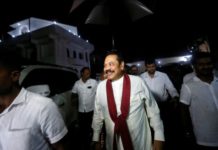 Iraq to respect dollar ban but not all U.S. sanctions on...

Waist not, want not for monks

Italy races to contain coronavirus outbreak as cases rise over 100