MELBOURNE (Reuters) – A senior Australian politician on Saturday said he was disturbed by the reported efforts of China to infiltrate politics in Australia, Hong Kong and Taiwan detailed by an asylum seeker who said he was a Chinese spy.

Resource-rich Australia’s ties with its most important trading partner China have deteriorated in recent years, amid accusations that Beijing is meddling in domestic affairs.

“These are very disturbing reports,” said Australian Treasurer Josh Frydenberg, adding that government law agencies were dealing with the matter.

He has also purportedly revealed details of how China funds and conducts political interference in Taiwan and Australia, the Age reported.

Police in China’s financial hub of Shanghai, responding to the Australian report, said Wang was a 26-year-old unemployed man from the eastern province of Fujian and was wanted in connection with a fraud case.

On April 10, he went to Hong Kong carrying a fraudulent Chinese passport and Hong Kong permanent residency card, they added in a brief statement.

Wang had previously been convicted of fraud in 2016 in Fujian, Shanghai police said.

Reuters reported before Australia’s election in May that Australian intelligence had determined China was responsible for a cyber-attack on its national parliament and three largest political parties. China denies the accusations.

Wang said he was a part of an intelligence operation within a Hong Kong-listed company that infiltrated universities and media, the Age said.

“I have personally been involved and participated in a series of espionage activities,” it cited Wang as saying in his October statement to the intelligence agency.

The ASIO declined to comment, saying only that it did not comment on operational matters or individuals.

Wang also said there were plans by China to disrupt the presidential vote on the self-ruled island of Taiwan next year, the Age added.

Taiwan’s presidential office said the government was investigating. A spokeswoman for the ruling Democratic Progressive Party called the information in Australian media a reminder of the threat from China.

“Whether it is the Chinese internet army or the Chinese government, it is using the democratic system of Taiwan to infringe upon our democracy,” Lee Yen-jong said.

China considers Taiwan a wayward province and has never ruled out the use of force to bring it under Beijing’s control.

Han Kuo-yu, the presidential candidate of Taiwan’s main opposition, the China-friendly Kuomintang party, urged the government to immediately send a team to Australia to investigate.

Wang also gave Australia details of the kidnapping of a Hong Kong bookseller taken to the mainland and interrogated on suspicion of selling dissident materials, the paper said. 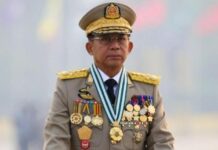