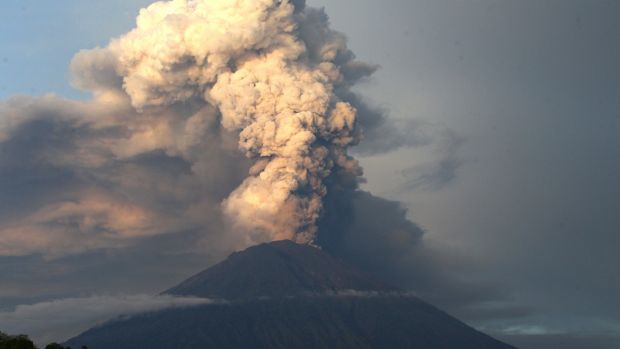 Indonesian authorities are preparing to evacuate residents by force as Bali’s Mount Agung volcano threatens to erupt and ash-laden skies left hundreds of thousands of holidaymakers in limbo.

The number of affected visitors on Wednesday totalled 120,000 as experts warned earlier that a major eruption was “imminent” and authorities closed Bali’s Ngurah Rai International Airport until Thursday morning.

Increased activity detected inside Mount Agung overnight suggests an eruption is likely, with volcanic rocks the size of fists reported at villages four kilometres from the summit on Tuesday afternoon.

Volcanic ash has also been detected up to seven kilometres in the skies above the summit of Mount Agung which is 72 kilometres from the popular holiday destination of Kuta.

The code red warning for air travel was downgraded, however, to orange – the second highest level – after initially being issued on Monday.

Only 40,000 Balinese in the exclusion zone have heeded warnings.

Increased seismic activity was detected at the volcano overnight following reports on Tuesday evening of a 30 minute tremor inside the crater after a series of small eruptions that began last week.

Thousands of travellers, including many on schoolies trips, remain stranded in Bali with all flights in and out of Ngurah Rai International Airport grounded until further notice.

Victorian schoolies Jesse Williams and Connor Harvey said they were worried about not being able to come home but wouldn’t let the volcano spoil their holiday plans.

Qantas, Jetstar and Virgin Australia advised passengers on Wednesday that all flights were cancelled for the day.

Ash from the volcano has blanketed the airport as well as local roads and buildings. Fifteen assembly points have been prepared around Bali in the event of a major eruption.

Mount Agung towers over eastern Bali at a height of just over 3000 metres and last erupted in 1963, killing more than 1000 people and razing several villages.

Bali, famous for its surf, beaches and temples, attracted nearly five million visitors last year but business has slumped in areas around the volcano since September when Agung’s volcanic tremors began to increase.

Many stranded Australian travellers say they are running out of funds and are missing important events back home.

One Perth family said they were missing their daughter’s primary school graduation and had spent hours at Ngurah Rai International Airport on Monday waiting for answers. WHO virus team could go to China this week, may include...