Oil pulling is a traditional Ayurveda method of oral care. It involves swishing sesame oil, coconut oil or similar oil in the mouth for 10-20 minutes as a means of preventing cavities, reducing bacteria, and promoting healthy gums.

Oil pulling is rapidly gaining in popularity in the Western world.Rinsing with a mouthful of oil for up to 20 minutes daily is said to be a fantastic detoxification method.

In fact, according to Ayurveda oil pulling purifies the entire system as each section of the tongue is connected to a different organ such as the kidneys, lungs, liver, heart, small intestines, stomach, colon, and spine.

By swishing oil in the mouth for several minutes, it is cleansing  between the teeth, underneath the gums, along with the tongue and on the surface of the teeth – pulling bacteria away. When spitting out the oil, it is removing these microbes from your body.

If these little invaders are removed from the mouth, they can’t make their way down to the gut – where 80% of immune system is located.

When we’re feeling sluggish it can sometimes be down to an overworked immune system. By boosting immunity, the body can direct its energy elsewhere.

Skin conditions like acne, rosacea, dermatitis, and psoriasis can be linked to the health of our gut. When the gut flora is back in balance, then the skin can begin to heal and regain its beautiful glow.

One of the most science-backed health benefits of oil pulling is its ability to improve oral hygiene, including bad breath, which is often caused by bacteria.

The National Institute of Dental and Craniofacial Research claims that tooth decay is the most prevalent chronic disease in both children and adults, even though it is largely preventable.
A study that reviewed holistic approaches to oral health discovered that oil pulling is one of the most effective natural solutions for preventing tooth decay and loss.

Coronavirus research to get $500 million boost at Paris meeting 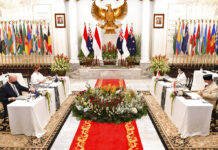