KYIV: The Ukrainian port city of Mariupol in the south-east of the country has been “90%” destroyed after being besieged by Russian forces, its mayor Vadym Boichenko said today.

“The sad news is that 90% of the infrastructure in the city is destroyed and 40% is unrecoverable,” Boichenko told a press conference.

Around 130,000 people remained trapped in the city, which continues to be pounded by Russian bombardments, he said.

Approximately half a million people lived in the city on the coast of the Sea of Azov before the outbreak of the war.

“The bombings are incessant,” the mayor said, with the notable use of “multiple rocket launchers”.

According to Boichenko, the majority of the attacks on the city were coming “from the sea”, where “Russian ships” were stationed.

“We are planning to evacuate the remaining residents, but we cannot do it today,” he said.

Russia and Ukraine have blamed each other for the difficulties encountered by recent evacuation attempts.

Mariupol has been under siege from Russian forces for over a month, leaving the population to fend for themselves in conditions which have been denounced by the international community. 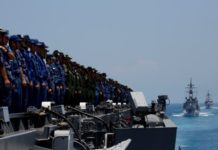