WASHINGTON: US President Joe Biden appeared to accuse Russian leader Vladimir Putin of genocide on Tuesday during a speech about gasoline prices.

“Your family budget, your ability to fill up your tank — none of it should hinge on whether a dictator declares war and commits genocide half a world away,” Biden said at the event in Iowa.

The Biden administration has sought to blame sharp rises at US gas stations on Putin’s invasion of neighbouring Ukraine, during which Russian troops have been accused of committing atrocities against civilians.

Ukraine has been accusing Russia of committing war crimes since even before the discovery of hundreds of civilians reportedly killed in Bucha sparked an outpouring of revulsion.

Biden described Putin as a “war criminal” last week amid the global outrage and called on him to face trial over the alleged atrocity.

But the US has stopped short of using the term “genocide”, in line with longstanding protocol, because of its strict legal definition and the heavy implication the accusation carries.

Biden previously was asked by reporters whether the killings in Bucha amounted to “genocide” and he replied: “No, I think it is a war crime.” 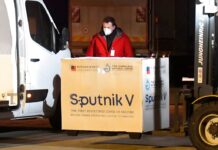