Biden wants the trip to boost a years-long US pivot to Asia, where rising Chinese commercial and military power is undercutting Washington’s dominance.

He received a warm welcome from South Korea’s new president Yoon Suk-yeol, but there is growing concern that North Korea’s unpredictable leadership could conduct a nuclear test while he is in the region.

There is a “real risk of some kind of provocation”, US national security adviser Jake Sullivan said, as South Korean intelligence warned this week that Pyongyang had completed preparations for a nuclear test.

Biden, in his first remarks since arriving in South Korea at the start of a trip meant to demonstrate US resolve to lead in Asia, said the two countries’ alliance was “a lynchpin of peace, stability and prosperity” in the world.

Speaking at a huge Samsung semiconductor factory in Pyeongtaek, alongside Yoon, Biden described the advanced chips manufactured there as “a wonder of innovation” and crucial to the world’s economy.

The tiny, smart wafers “enable our modern lives” and are “the key to propelling us into the next era of humanity’s technological development”, he added.

Semiconductors — the microchips essential to most modern devices from phones to cars and high-tech weapons — are at the heart of a global supply chain slowdown that threatens to disrupt the world’s post-Covid economic recovery.

South Korea and the US need to work to “keep our supply chains resilient, reliable and secure”, Biden said.

For the US leader, whose Democratic Party faces a severe pounding in midterm elections this year, the issue is also an acute domestic political challenge, with Americans increasingly frustrated over rising prices and stuttering economic reopening.

Ahead of the speech, Biden toured the huge Samsung plant, taking in lengthy presentations from staff clad in hazmat suits on the equipment used to produce semiconductors.

After a briefing from a US representative from a California company working with Samsung, Biden quipped: “Don’t forget to vote Peter.”

Samsung employs about 20,000 people within the US and work is underway to build a new semiconductor plant in Texas, opening in 2024.

South Korea is a semiconductor powerhouse, supplying about 70% of chips globally, Yoon said in his speech.

Biden’s visit could help the two allies forge a new “economic and security alliance based on advanced technology and supply-chain cooperation”, Yoon said.

“Semiconductors became something akin to a strategic commodity now,” Vladimir Tikhonov, professor of Korean studies at the University of Oslo, told AFP.

Biden “needs Samsung’s collaboration in this regard”, he added.

Security issues were not top of the agenda Friday, but the fact that Biden is visiting Seoul first on his Asia tour indicates that Washington is looking to re-focus on the Korean Peninsula, Soo Kim, a former CIA analyst, told AFP.

Both Seoul and Washington may be looking to “bridge the policy gap” and plan how the security allies could better coordinate to address challenges in the region and beyond, Kim, now with the RAND Corporation, said.

Biden heads to Japan from South Korea on Sunday. He will hold talks with the leaders of both countries, as well as joining a regional summit of the Quad — a grouping of Australia, India, Japan and the US — while in Tokyo.

Sullivan said ahead of the trip that Biden is bound for Asia with “the wind at our back” after successful US leadership in the Western response to president Vladimir Putin’s now almost three-month-long invasion of Ukraine.

The high military, diplomatic and economic cost imposed on Russia is seen in Washington as a cautionary tale for China, given Beijing’s stated ambitions to gain control over democratic Taiwan, even if that means going to war.

Sullivan said the administration wants not so much to confront China on the trip as to use Biden’s diplomacy to show that the West and its Asian partners will not be divided and weakened.

“We hope that the US will match its words with its deeds,” Wang Wenbin, a spokesman for China’s foreign ministry, said Friday.

The US should “work with other countries in the region to promote unity and cooperation in Asia-Pacific, instead of plotting division and confrontation”, he added.

Prithvi Highway Disrupted Due To Floods 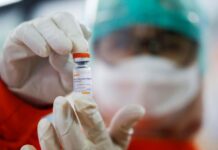