WASHINGTON (Reuters) – The Biden administration is granting temporary protected status to Venezuelan migrants living in the United States and is also working to coordinate international pressure against President Nicolas Maduro to hold free and fair elections, senior U.S. officials said on Monday. The decision, which could aid an estimated 320,000 people, fulfills a promise that President Joe Biden made during the 2020 election campaign to give shelter to Venezuelans who left their homeland amid economic collapse, humanitarian crisis and political turmoil under Maduro.

Venezuelans in the United States will have to show they have been residing in the country continuously as of March 8, 2021, to qualify for the Temporary Protected Status (TPS) designation, the officials told reporters. If they meet the criteria, they will be given an 18-month reprieve to stay and can also obtain work permits.

The decision stems from “extraordinary temporary conditions” in Venezuela, including “widespread hunger and malnutrition, growing presence and influence of non-state armed groups, a crumbling infrastructure,” one official said.

“It is not safe for them to return,” the official added.

Some 5.4 million Venezuelans have emigrated in recent years, according to the United Nations High Commissioner for Refugees.

When Biden took office on Jan. 20, he inherited from his predecessor, Donald Trump, an array of harsh sanctions that further tightened the economic noose on the OPEC state but failed to unseat Maduro.

One of the administration officials reiterated the White House position, reported by Reuters late last month, that Biden is in “no rush” to lift sanctions on Venezuela.

But the official stressed that Biden was moving away from the mostly unilateral approach of Trump’s “maximum pressure” campaign and coordinating more closely with international partners to force Maduro to hold free and fair elections.

The official insisted that Maduro and his loyalists will find “no quarter anywhere” until they negotiate in earnest with the opposition. However, Maduro has shown no signs of giving ground.

At the same time, the official said, Washington is reviewing Venezuela sanctions to make sure they are effective against intended targets and not “unnecessarily” punishing the Venezuelan people.

The Trump administration had resisted granting TPS to Venezuelans despite calls from Democrats and some Republicans. But on his last full day in office Trump issued an order temporarily blocking deportations of Venezuelans.

Trump largely sought to phase out TPS for immigrants but was stymied by legal challenges. Biden has moved to reverse Trump’s hardline immigration policies. 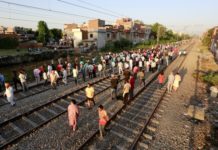