WASHINGTON (Reuters) – President Joe Biden will announce on Tuesday that the U.S. delivered 150 million vaccines since he took office and move up by nearly two weeks a deadline to make doses widely available, according to a person familiar with the matter.

Biden will direct states to widen distribution of vaccines to all eligible American adults by April 19, two weeks earlier than the May 1 deadline he announced before.

On Tuesday, the president is scheduled to tour a vaccination site at Virginia Theological Seminary in Alexandria, Virginia, before making the announcement at the White House.

The federal government has significantly ramped up the pace of vaccination as it works to end the COVID-19 pandemic. States with limited vaccine supply initially limited early doses to higher-risk groups, such as the elderly.

Biden initially set a goal of delivering 100 million shots into people’s arms within his first 100 days in office, which is the end of April.

The goal has since been doubled to 200 million shots.

COVID-19 has killed 500,000 Americans, but more than 167 million doses have been administered in the country. Four in ten Americans have had at least one vaccine dose, a rate far ahead of most countries.

﻿At least 40 inmates strangled to death in Amazon prison gang...

Bangladesh to move 2nd batch of Rohingya refugees to remote 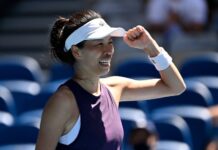 Hsieh happy to avoid a bagel on way to fourth round