“The secretary expressed concern about Russia’s deliberate actions to escalate tensions with Ukraine, including through its aggressive rhetoric and disinformation, increasing ceasefire violations, and movement of troops in occupied Crimea and near Ukraine’s borders,” the State Department said in a statement.

Blinken is visiting Brussels this week for NATO talks. 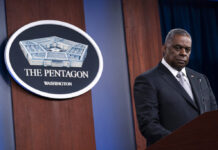 Volcanic Caribbean island of Dominica shaken by explosion of steam and...