BRASILIA: Brazil recorded the most fires in the Amazon rainforest in 14 years for the month of June, government data showed on Thursday, amid worries that an extreme drought in many parts of the region could fuel worse fires in months to come.

National space research agency Inpe recorded 2,308 hot spots in the Brazilian Amazon in June, a 2.7% rise from the same month a year ago, when fires had reached a 13-year high.

While the number of fires in June only amount to a fraction of those seen at the peak of the dry season in August and September, environmental advocates fear it’s a sign of worse to come.

“With a high number of fires already at the start of the Amazon summer, when there is naturally a decline in rains in the Amazon, this number will likely rise,” Greenpeace Brasil said in a statement.

Scientists warn that dry weather along the Amazon’s so-called “arc of deforestation” and in the Pantanal wetlands could drive a worse fire season. Hydroelectric plants across the country have reported the lowest water inflows in 91 years amid intense drought, according to the Mines and Energy Ministry.

Fires in the Amazon are overwhelmingly man-made, with natural blazes extremely rare. Generally, loggers illegally cut down valuable trees and then land-grabbers set a fire to clear the space for cattle. Fire can also be used as part of traditional agriculture.

Dry weather increases the odds of fires running out of control.

President Jair Bolsonaro earlier this week banned most outdoor fires in the country for 120 days as a precaution and deployed the military to protect the region from fires and deforestation.

Those policy moves repeat steps taken in 2019 and 2020 that failed to lower deforestation and fires. For the full year of 2020, fires in the Amazon reached a four-year high, while deforestation hit a 12-year high, according to Inpe. 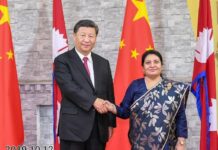 China To Provide Additional 1 Million Doses Of COVID-19 Vaccine As...