The intentional shut-off, the largest in the state’s history, comes as extreme weather conditions heighten the threats of wildfires.

Here are the latest developments:

Firefighters worked the south flank of the Kincade Fire in Geyserville, Calif., on Saturday.Credit…Eric Thayer for The New York Times

The blackout zone has been expanded to cover up to 2.7 million people.

Pacific Gas and Electric expanded its power blackout zone to include 940,000 customers on Saturday, as the extreme weather conditions heightened the risk that sparks from its equipment could ignite wildfires throughout the utility’s service area.

The blackout could affect as many as 2.7 million people, and would be the largest power shut-off to prevent wildfires in California history.

“The next 72 hours are going to be challenging,” said Gov. Gavin Newsom. “I could sugarcoat it but I’m not.

PG&E added 90,000 customers to the intentional power shut-off as forecasts indicated that widespread dry, hot and windy weather is expected to begin moving through the region between 6 p.m. and 10 p.m. Pacific time Saturday and continue through midday Monday. Gusts were forecast to reach up to 80 m.p.h.

PG&E planned to phase in the blackouts in stages. After some delays, shut-offs began at 5 p.m. in the Northern Sierra foothills and the North Bay areas, PG&E executives said in a briefing. The Bay Area shut-offs are expected to begin at 8 p.m. These are the first two of seven phases in the blackout, with each phase taking two to three hours to complete. The first two phases represent about 332,000 of the 940,000 customers who are expected to lose their power.

On Saturday evening, Andy Vesey, PG&E’s chief executive for utility operations, insisted that cutting power was a last resort, and he defended the company’s “high-integrity equipment.” But he pointed out that high winds toss tree limbs: “When debris hits these wires, any spark can be an ignition source.”

Gridlock and long lines for gas as 50,000 are told to flee Sonoma County.

Sonoma County officials ordered 50,000 residents to flee the spreading Kincade Fire, which has already consumed 25,955 acres. It was the county’s largest wildfire evacuation in more than 25 years, Sheriff Mark Essick said. The blaze, which started Wednesday, was 10 percent contained on Saturday afternoon.

All around Sonoma County on Saturday afternoon, there were signs of widening flight and the looming blackout. An evacuation center in Healdsburg had to itself be evacuated to Petaluma, 30 miles south. Southbound traffic on Highway 101 backed up for miles leaving Healdsburg, where popular boutiques and farm-to-table restaurants were deserted just after noon.

Traffic had ground to a dead halt in downtown Windsor by early Saturday afternoon, where lines for gas stations spilled into gridlocked roadways and radio stations blared orders to evacuate by 4 p.m. Manoj Ghimire was preparing to close early at Windsor Fast & Easy Mart after he received notice from PG&E that power to the store would be cut this afternoon. He’d already sold out of ice and water and seen a spike in people buying beer and milk.

“A lot of things are out,” Mr. Ghimire said. “The water I’ve never run out of before.”

Sheriff Essick and state fire officials hoped that by preparing for the worst, they could avoid the devastation of the Tubbs Fire in 2017, which killed 22 people and destroyed 5,600 buildings. The authorities urged people to not put emergency workers in danger by refusing to flee, noting that one firefighter had already been taken to a hospital after protecting two residents with a fire shield.

An additional 39,000 people are ordered to evacuate on Saturday night.

Emergency responders expanded a mandatory evacuation zone as far west as the Pacific Ocean on Saturday night, bracing for wind gusts of up to 80 miles per hour. An additional 39,000 people were included in the latest evacuation order.

Public safety officials urged the public to comply with the evacuation order, recalling a 2017 fire in the area that killed 22 people.

“I’m seeing people reporting that they’re going to stay and fight this fire,” Sheriff Essick said during a news conference Saturday night. “Fire is not something you can stay and fight.”

The authorities said 77 structures had been destroyed, including 31 homes. More than 2,830 personnel were fighting the fire.

Firefighters from the Marin County Tamalpais Fire Crew began to dig a containment line ahead of the Kincade Fire on Friday.Credit…Max Whittaker for The New York Times

Furious state officials responded to the expanded power shut-offs with calls for the ouster of PG&E’s management.

Senator Jerry Hill, a Bay Area Democrat recently appointed to a panel to review PG&E’s handling of the power shut-offs, said the time has come for the courts to take control of the company before more damage is done.

“PG&E is a failure at every level,” Mr. Hill said. “PG&E should no longer be allowed to do business in California.”

Gov. Gavin Newsom on Saturday reiterated his frustration with PG&E’s decision to blackout hundreds of thousands of customers, rather than the more surgical approach taken by other utilities.

“The scale and scope is clearly unacceptable,” Mr. Newsom said.

He added that PG&E had made improvements to some of its operations since widespread power shut-offs Oct. 9, when it was criticized or failing to give notice to many of the two million people who were left in the dark. But he said the utility continues to fail in communication, with some utility customers receiving only a four-hour warning of the current blackouts, instead of the required 24- to 48-hour notice.

In response to criticism of PG&E’s communication, Andy Vesey, the utility’s chief for utility operations, said, “we can always improve our game on everything. It takes a lot of communication. I think we’re doing a very, very good effort at the moment.”

Even as the third power shut-off was beginning, Mr. Vesey warned that early forecasts indicate that more severe wind could develop in the early to middle part of the next week.

“As the power comes back on, please use that time to prepare for the next event,” he said.

PG&E filed for bankruptcy in January after amassing tens of billions of dollars in liability related to two dozen wildfires in recent years. As speculation grew that its equipment might be the cause of the Kincade Fire, its stock price plummeted about 30 percent on Friday to $5.08, a small fraction of its 52-week high of $49.42.

The Kincade fire swept through Geyserville, Calif., on Friday.Credit…Max Whittaker for The New York Times

The National Weather Service signaled an uphill battle for firefighters over the weekend, issuing a wind advisory and a red-flag warning that is expected to remain in effect in Sonoma County from Saturday evening through Monday morning.

The agency forecast “strong and gusty” winds Saturday night into Sunday morning, with the possibility of sustained winds from 30 to 40 miles per hour, and 60 to 80 m.p.h. gusts overnight in certain mountain and hill regions.

“Once we get that red-flag warning starting to come in at 8 o’clock and we get those high winds that are going to follow with that, we’re going to see some erratic fire behavior,” Capt. Stephen Volmer, a fire behavior analyst, said at a news conference on Saturday morning.

After running models for 12 hours overnight, Captain Volmer said, he saw the potential for fire-weakened timber to fall down across power lines and roads, possibly igniting new fires. He warned that “any ignition that does happen will travel extremely fast with erratic fire behavior.”

This winds look to be the strongest since the 2017 Wine Country fires and potentially historic in strength and duration, according to the Weather Service.

Steve Anderson, a forecaster based in Monterey, Calif., said the wind could be much worse this time. In 2017, the high winds lasted four to six hours, causing the fire to push itself out, hopscotching across the mountains and valleys. Now, he said, the winds could last anywhere from 24 to 30 hours.

“The conditions have to be just right for the winds to be that strong,” Mr. Anderson said. “They haven’t been that strong in a couple of years.”

A plane dropped fire retardant ahead of the Kincade Fire in the Geysers, Calif., on Friday.Credit…Max Whittaker for The New York Times

A transmission tower may have caused the Kincade Fire.

The Kincade Fire in Sonoma County broke out after Pacific Gas and Electric began its pre-emptive power shut-offs in the area on Wednesday. PG&E later said one of its transmission towers was a possible cause of the fire.

But wasn’t preventing a fire the point of the blackout?

As it happens, when electricity was cut off to homes and businesses, it was still flowing through the long-distance lines that make up the power grid.

The distinction is much like the role of neighborhood streets in relation to a major highway. The major arteries — the transmission lines — are supported by substantial metal towers that are engineered to provide multiple points of support for the wires. The wooden poles strung with the wires that deliver the power to customers — the distribution lines — are less sturdy. And that makes them more susceptible to wind.

Bill Johnson, PG&E Corporation’s chief executive, said at a news conference Thursday night that based on the utility’s analysis, the wind forecast did not warrant cutting power to the transmission lines in the area of the Kincade Fire, even though the distribution system had been shut down.

PG&E said in a regulatory filing on Thursday that fire officials had informed a company employee about “what appeared to be a broken jumper” on a transmission tower near the origin of the Kincade Fire. It said it was continuing to investigate, along with state fire officials.

It is the second consecutive year that a PG&E transmission tower is suspected as the source of a major wildfire. The utility said its equipment was probably responsible for last year’s Camp Fire, which killed scores of people and destroyed the town of Paradise.

A broken, 100-year-old transmission tower that was 25 years past its “useful life” by PG&E’s own standards, has been eyed as the source of the wildfire. The transmission tower under scrutiny in the Kincade Fire was 43 years old and had recently been inspected, Mr. Johnson said. 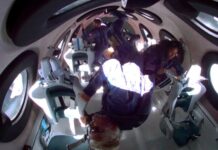