LOS ANGELES: California firefighters scrambled overnight today to battle a fast-moving blaze that has scorched more than 13,400 acres and prompted evacuation orders since it started Monday, according to local authorities.

Burning in a dry, scrub-filled canyon about 20 miles (32km) northwest of Santa Barbara, the Alisal Fire is just 5% contained, according to the US Forest Service.

More than 765 firefighters have been assigned to the blaze, the latest in what has already been a devastating wildfire season.

“The main constraint has been heavy winds that have limited safe access to suppress the fire and limited the use of aircraft to engage and support fire suppression,” an incident report said.

The cause of the fire, which began near the Alisal Reservoir on Monday afternoon, remains under investigation, the state’s fire agency Cal Fire said.

The Santa Barbara County Sheriff’s Department issued evacuation orders for a 10-mile stretch between El Capitan Beach State Park and Arroyo Hondo Canyon, while a portion of the iconic Highway 101 was shut down and local railway lines suspended.

Alisal is the latest fire to burn California, which has been plagued by increasingly large-scale and record-breaking infernos.

By late July, the number of acres burned in California was up more than 250% from 2020 – itself the worst year of wildfires in the state’s modern history.

Along with other parts of the western US, California has struggled under a years-long drought that has left swathes of the region’s tinder dry.

After historic rocket launch, Chinese startup to ramp up missions

Crystal Palace fight back to draw relegation tussle with Newcastle

Another Spell Of Torrential Rains Predicted 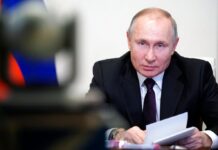