JALALABAD, Afghanistan (Reuters) – A suicide bomber blew himself up at an election rally in Afghanistan’s eastern province of Nangarhar on Tuesday, killing at least 13 people and wounding more than 30, officials said, warning that the toll was likely to climb.

Campaigning for the Oct. 20 parliamentary election began on Friday and security officials have warned of the danger of militant attacks during the campaigning.

Attaullah Khogyani, spokesman for the provincial governor in Nangarhar, said at least 13 bodies were taken to hospitals, but others said the toll was likely to be higher.

“Elders were speaking at the meeting when there was suddenly a huge blast,” said Sayed Humayoun, who had been at the rally in Kama district, outside the provincial capital Jalalabad.

“I was knocked unconscious but when I opened my eyes there were bodies scattered all around the blast area,” he said, adding that he could see dozens of dead and wounded.

Around 250 people had been at the rally, said Sohrab Qaderi, a member of the provincial council, adding that at least 30 were killed and dozens more wounded.

Islamic State claimed responsibility for the attack in a statement carried by its Amaq news agency. The group has claimed a series of attacks this year that have killed scores of people in Nangarhar, on the border with Pakistan.

Another explosion took place at a cricket ground in Nangarhar’s Bati Kot district on Tuesday afternoon.

“Seven children aged between 12 and 15 years were injured in the blast at the playground,” Khogyani said.

The parliamentary election is seen as both a dry run for the more important presidential election next year, and a test of the government’s ability to provide security.

Officials say sustained violence could delay the process if it becomes unsafe for voters to go to polling stations. 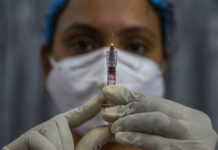 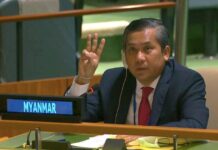