TAIPEI: A huge pay rise, eight free trips home a year and a heavily subsidised apartment. It was a dream job offer that a Taiwanese engineer simply could not refuse.

A veteran of Taiwan’s top-tier chipmakers, including United Microelectronics Corp (UMC), the engineer took up the offer from a Chinese state-backed chipmaker last year and now oversees a small team at a wafer foundry in eastern China.

Attracting such talent from Taiwan has become a key part of an effort by China to put the industry into overdrive and reduce the country’s dependence on overseas firms for the prized chips that power everything from smartphones to military satellites.

That drive, which started in 2014, intensified this year as US-China trade tensions escalated, according to recruiters and industry insiders, exposing what China feels is an over-reliance on foreign-made chips.

China imported US$260bil worth of semiconductors in 2017, more than its imports of crude oil. Home-made chips made up less than 20% of domestic demand in the same year, according to China Semiconductor Industry Association.

More than 300 senior engineers from Taiwan have moved to Chinese chipmakers so far this year, joining nearly 1,000 others who have relocated since Beijing set up a US$22bil fund to develop the chip industry in 2014, according to estimates from H&L Management Consultants, a Taipei-based recruitment firm.

The battle for skilled engineers has raised concerns in Taiwan that the island could lose a key economic engine to its political foe, China. Analysts say China is still years behind Taiwan in terms of chip design and manufacturing, however, even as it moves ahead in terms of the production of lower-end chips.

Tariffs imposed by Washington on US$16bil worth of China’s imports have hit Chinese semiconductors, which are now subject to tariff rates of 25%.

Underscoring the talent crunch, two state-run institutions said in August that about 400,000 professionals were working in China’s integrated circuit sector at the end of 2017, far short of the estimated 720,000 workers needed by 2020.

While China has also targeted engineers from South Korea and Japan to address that shortage, it has had the most success in Taiwan thanks to a common language and culture, recruiters say.

Lin Yu-Hsuan, a manager at the recruitment firm H&L, said engineers from Taiwan were lured by high pay, perks and more senior positions at Chinese chipmakers like Semiconductor Manufacturing International Corp (SMIC) that are flush with cash from China’s multi-billion chip fund.

“Many of them said: ‘the money I will earn in China in three years is equivalent to what I could get in Taiwan in 10 years. I could retire earlier’,” Lin said.

Steve Wang, the vice chairman and president of Novatek Microelectronics, a Taiwanese integrated chip designer, said a small percentage of its employees had left for China over the past two years, and acknowledged that it would be difficult to match offers from Chinese rivals.

The engineer at the wafer foundry, who declined to be named as the details of his contract were not public, said his Chinese employer offered him a new three-bedroom apartment with a 40 percent discount on the condition that he worked for the company for more than five years, in addition to a 50% pay rise. He declined to give the exact figure.

“China dares to burn money, whereas Taiwan companies have limited resources,” he said.

A senior executive at a newly-established chipmaker in northeastern China, SiEn (QingDao) Integrated Circuits Company Ltd, said about one-third of its recently recruited 120 engineers were from Taiwan.

“There is not a lack of money. What we need is talent,” said the person, who declined to be named as he was not authorised to speak to the media. He said the company, led by Richard Chang, the founder of SMIC, China’s leading chipmaker, offers new hires discounted property and attractive subsidies for bilingual schools in the port city of Qingdao.

“Taiwanese engineers are most experienced and could help us cultivate local talents,” the executive said. “The movement will continue to escalate.”

Industry watchers said Taiwan’s widely respected chip design houses and foundries have been among the hardest hit by the outflow of engineers, and have been forced to ramp up spending to lure workers.

The island’s leading integrated circuit designers and chipmakers have seen a 35% jump in labour costs, including salary and benefits from two years ago, compared with a 21% hike in revenue, according to Reuters calculations based on corporate filings from Taiwan’s 10 largest listed companies by market value.

Taiwan has been watching the Chinese recruitment efforts with growing anxiety.

It has long barred chipmakers like Taiwan Semiconductor Manufacturing Co Ltd, a key supplier to Apple Inc, from moving their most advanced technology to manufacturing operations in China to keep it from falling into the hands of Chinese rivals.

Many in Taiwan are also concerned that the rapid development of China’s chip industry could lead to the sort of oversupply and plunging prices that came with Chinese efforts to develop other key industries like solar panels and liquid crystal displays.

China’s integrated circuit design firms have already surpassed their Taiwan rivals in terms of revenue, with US$31bil in 2017, compared with Taiwan’s US$22bil , according to Mark Li, an analyst at Bernstein.

The fears are that the battle for talent will widen that gap further.

In a move to retain top talent, Taiwan’s cabinet in July pledged to relax tax regulations on employee stock ownership.

Ho Chan-cheng, legal affairs director at Taiwan’s Intellectual Property Office, said “inappropriate poaching” could lead to the leaking of trade secrets and that the government was working to protect the island’s core technology – namely the capacity to increase chip yield per wafer.

Taiwan companies are also trying to offer their own incentives.

Antonio Yu, spokesman for the Taiwan-based chip design house Phison Electronics Corp, said that while the company “does not have the capital to play such a money game”, it has tried to create a “reassuring environment” for its employees.

He cited long-standing cash bonuses and programs such as free legal counselling, as well as a monthly town hall meeting with Phison’s chairman, Khein-Seng Pua. “We treat our employees like family,” he said.

Despite such efforts, Taiwanese engineers are finding incentives from China hard to resist.

Tommy Huang, a 37-year-old Taiwanese chip engineer who in 2016 joined United Semiconductor in southern China – a joint venture between Taiwan’s UMC and Chinese state-backed partners – said Taiwanese efforts to retain talent did not work for him.

“You don’t have any chance if you stay in Taiwan,” said Huang, whose Chinese employer offered him an annual school subsidy of up to 60,000 yuan for his five-year-old child and a salary more than double what he earned in Taiwan. “We are buying hope by coming to China.” – Reuters 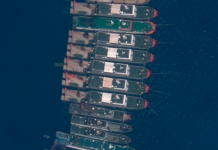 Bomb blast at Pakistani religious school kills at least 7, including...