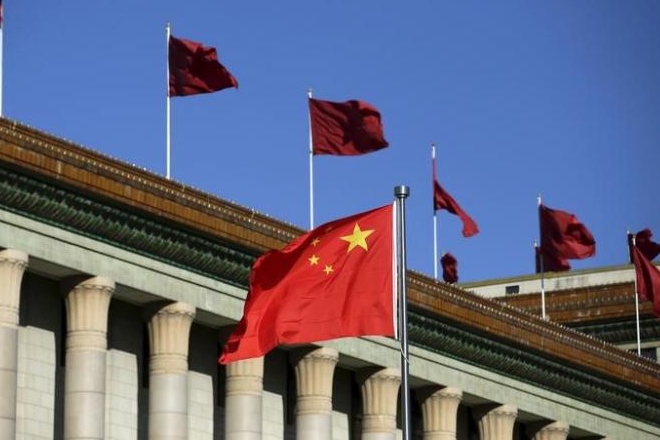 China on Thursday reiterated its call for an agreement between North Korea and the U.S. under which the North will gain concessions if it freezes its nuclear weapons program, apparently contradicting remarks a day earlier by President Donald Trump.

Foreign Ministry spokesman Geng Shuang said China’s position has not changed and the “freeze-for-freeze” initiative, under which the U.S. and South Korea will suspend large-scale military exercises in return, remains a “first step.”

“We believe that the freeze-for-freeze initiative is the most viable and reasonable plan against the current backdrop, which cannot only alleviate the current tensions, but also addresses the most urgent security concerns of all sides,” Geng told reporters at a regular briefing.

Such an agreement will “create opportunities and conditions for the resumption of peace talks, and find breakthroughs to get out of this stalemate,” Geng said.

The U.S. has long dismissed the proposal, saying North Korea must unilaterally cease its program before negotiations can begin. On Wednesday, Trump told reporters that China had agreed with the U.S. on that point during his 12-day trip through Asia that included a state visit to China, where he was hosted by President Xi Jinping.

“President Xi recognizes that a nuclear North Korea is a grave threat to China, and we agreed that we would not accept a so-called freeze-for-freeze agreement, like those that have consistently failed in the past,” Trump said.

China and Russia have proposed the agreement, also known as “dual suspension,” as a way to restart long-stalled negotiations.

China, North Korea’s only major ally, said Wednesday that it will send a high-level special envoy to Pyongyang, the North Korean capital, amid an extended chill in relations between the neighbors.

Trump, who wants China to play a bigger role in pressuring North Korea to end its nuclear program, reacted to the announcement of the visit by calling it a “big move.”

“China is sending an Envoy and Delegation to North Korea — A big move, we’ll see what happens!” he tweeted Thursday. He did not elaborate.

North Korea is not believed to have achieved the key technology needed to build a ballistic missile that can survive a re-entry through the atmosphere. An official from South Korea’s top spy agency told lawmakers Thursday that Pyongyang’s missile program still faces that barrier, the Yonhap news agency reported Friday, citing a “parliamentary source.”

Building a vehicle that can protect warheads from the heat and stress of a return flight — or re-entry capability — is critical for developing functional intermediate-range and intercontinental ballistic missiles (ICBM).

The National Intelligence Service told members of the National Assembly’s Intelligence Committee that North Korea’s recent missile engine tests have not provided the necessary capability, Yonhap said. A two-month hiatus in missile launches could be due to economic sanctions and financial constraints, the news agency said.

In July, Kim declared he could strike the entire continental U.S. after test-firing the regime’s second ICBM within a month — a claim disputed by American officials.

The report said that throughout 2017 there has been continued movement of parts and components into and out of two parts yards adjacent to the construction halls in the center of the shipyard.

It said the Nov. 5 images showed two large circular objects that could be sections of a submarine’s pressure hull. It said these appeared larger than those for North Korea’s ROMEO-class attack submarine.

Images of a test stand indicated continued testing of a mechanism for ejection launch of missiles from a submarine. However, the report said no activity could be seen suggesting preparations for a new test of a submarine-launched missile.

Trump says he condemns all white supremacists including ‘Proud Boys’

EU rules out Brexit renegotiation as May seeks help from Merkel