BEIJING (Reuters) – China’s foreign ministry on Monday said it had never heard of any country having a security problem with Huawei Technologies Co Ltd [HWT.UL], after a top executive of the telecoms giant was arrested in Canada.

Ministry spokesman Lu Kang made the comment at a daily news briefing in Beijing.

Huawei Chief Financial Officer Meng Wanzhou is fighting to be released on bail after she was arrested on Dec. 1 in Vancouver at the request of the United States.

Meng argued that she should be released on bail while awaiting an extradition hearing, citing fears for her health while incarcerated in Canada along with other factors, court documents have shown. 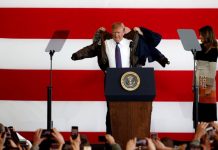