At a committee hearing that yielded a few new details on how Trump wants to move money between accounts without the approval of Congress, the Democratic chairwoman of the panel delivered a harsh rebuke to Pentagon witnesses.

“I’m not sure what kind of chumps you think my colleagues and I are,” said Representative Debbie Wasserman Schultz, who chairs the Appropriations military construction subcommittee.

“What you are doing is circumventing Congress to get funding for the wall, which you could not get during the conference process,” she said, referring to a bipartisan spending measure approved by Congress and signed into law by Trump on Feb. 14.

McMahon said that no money would be taken away from housing for soldiers and that the Pentagon would target project deferrals with “no or minimal operational readiness risks.”

He said the Pentagon will ask that any funding that is deferred be fully replenished in next year’s appropriations bills making their way through Congress in coming months.

Republican Representative Kay Granger urged McMahon to inform Congress of the specific projects the Pentagon would defer. He said specific decisions had not yet been made.

Democratic Representative Chellie Pingree of Maine expressed concern that a deferral could delay maintenance at a Portsmouth naval shipyard in her state. She also said she feared that the White House could target projects in congressional districts whose House members voted to terminate Trump’s emergency declaration.

On the day he signed the bipartisan spending measure – which provided $1.37 billion for physical barriers on the border, but not the $5.7 billion he wanted for his wall – Trump declared a national emergency at the border, saying that would empower him to shift money from other accounts to his wall.

The House of Representatives on Tuesday approved a resolution to terminate the emergency order, although the Senate has not yet acted on the measure. Even if the Senate approved it, Trump would likely veto it.

The White House has identified $3.6 billion in Pentagon construction projects that it says can be tapped for building the wall, which Trump first proposed when he was a candidate. At that time, he promised Mexico would pay for it. Since Mexico has refused, he now wants U.S. taxpayers to foot the bill.

Trump says a wall is needed to fight illegal immigration and crime; Democrats say it would be too costly and ineffective and that there is no actual emergency at the southern border. 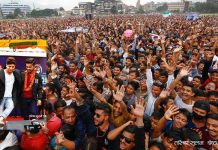 Half Sanitisers In Market Ineffective To Kill Virus