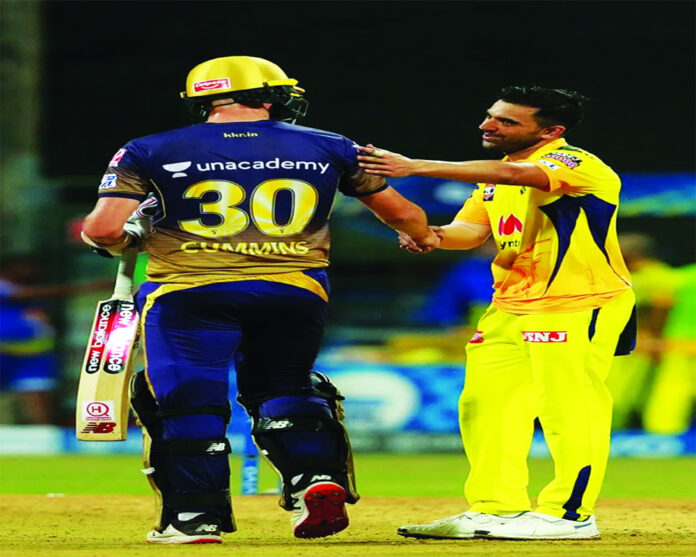 Chasing a stiff target, KKR found themselves in deep trouble as they slumped to 31 for 5 inside five overs after a top-order collapse with Chahar wrecking havoc with figures of 4 for 29 from his four overs.

But it was not over for KKR as yet. Batting at No 8, KKR pace spearhead Cummins displayed some sensational powerhitting in his 34-ball 66 not out (4×4, 6×6) but they simply did not have enough batting left to keep the show going.

Cummins smashed Curran for 30 runs with four sixes and one boundary in the 16th over to keep the run-chase alive, even as they kept losing wickets.

It was down to 20 runs with one wicket in hand in the last over. But Prasidh Krishna was run out in the first over of the final over.

The win took CSK to the top of the table with six points from four matches, while KKR slipped to sixth.

Chahar, who had wrecked havoc against Punjab Kings the other day, was at his ominous best once again as he swung the match in CSK’s favour to leave KKR tottering at 31 for 5 inside the powerplay.

Chahar, who grabbed 4/13 against Punjab Kings, made the ball talk with his swing and variation and snapped the talented Shubman Gill for a golden duck and then had the in-form Nitish Rana (9) in the second over.

But Chahar’s biggest wicket came in the next over in the form of skipper Eoin Morgan (7) when the left-hander nicked an outswinger with M S Dhoni completing a safe catch to become the first wicketkeeper to complete 150 dismissals in IPL.

Earlier, looking for a change of fortunes in their first match at the Wankhede, KKR opted to bowl on flat track but du Plessis blazed his way to a masterclass 95 not out after his opening partner Ruturaj Gaikwad’s impressive 64 as CSK posted 220 for 3.

Sanctions on Iran having effect, but regime change is not U.S.... 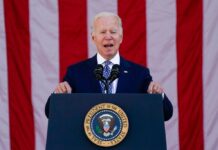 Biden signs legislation to tighten US restrictions on Huawei, ZTE