CHARLOTTE: President Donald Trump opened his bid for a second term after securing the Republican nomination Monday in typically combative fashion by claiming Democrats want to “steal” the election that polls currently show him losing.

Minutes after the party completed the nomination vote confirming Trump as the candidate on Nov 3, he appeared at the convention in Charlotte, North Carolina, to deliver a rambling, often dark speech lasting close to an hour.

From the opening words, he told Republicans to be on alert for what he claimed was a Democratic plan to rig the contest through increased use of mail-in voting – a measure Democrats say is needed to protect people from catching Covid-19 in crowded polling stations.

“They are trying to steal the election,” he told party delegates.

“The only way they can take this election away from us is if this is a rigged election.”

Opponents say Trump’s increasingly extreme resistance to expanded mail-in voting – a method already used widely in the US – is an attempt to suppress voter turnout while setting up an excuse to challenge the result if he is defeated.

Polls show Trump losing to Democratic candidate Joe Biden, who had his Democratic convention last week, as Americans turn on his handling of the coronavirus pandemic and subsequent economic chaos.

Trump hopes the convention, which concludes Thursday with his formal acceptance of the nomination, will shift voters’ attention from the coronavirus to what he says is the “super-V” shaped economic recovery.

As a veteran of reality TV, Trump is convinced that the more he gets on stage the better for changing the narrative in his favour.

So while incumbents usually keep away from their party conventions until the final night, Trump immediately took over the event in Charlotte, which had been drastically scaled back due to Covid-19 precautions.

He then flew to the North Carolina town of Mills River with his daughter Ivanka to give another speech, declaring “the great American comeback is underway”.

Trump is expected to make more live television appearances on each of the four days of the convention ahead of his acceptance speech at the White House.

His children, including Ivanka and right-wing firebrand son Don Jr, will also be giving convention speeches.

First Lady Melania Trump will address the nation from the White House’s Rose Garden on Tuesday.

In addition to suffering from broad unpopularity, Trump is weighed down by ever-growing turmoil and scandal around his administration.

Former chief strategist Steve Bannon was arrested last week on fraud charges and a current top advisor, Kellyanne Conway, announced late Sunday that she is stepping down shortly to spend time with her family.

The Republican insists, however, that he can replicate his surprise 2016 win – and hopes the convention will put the wind in his sails.

“This week we will take our case to the American people,” Vice-President Mike Pence told delegates ahead of Trump’s arrival, promising to “make America great again – again”.

Trump’s use of the White House as a setting for the acceptance speech will be a dramatic show of political muscle, but it tramples over the custom of separating political campaigns from the office of president.

In another move stretching etiquette, Secretary of State Mike Pompeo will make a speech on his behalf while conducting an official trip to Israel.

Biden is tapping into unhappiness with the president’s handling of the pandemic, unrest over racial inequality and fear of longterm economic damage from the coronavirus shutdown.

Beyond bread and butter issues, Trump’s abrasive style, his habit of insulting people in public, his demonisation of journalists and almost total inability to talk to Democratic leaders has left the country divided and exhausted.

In a potential new flashpoint, protests erupted in the critical electoral state of Wisconsin after police there shot a black man in the back.

While details were still unclear, Wisconsin Governor Tony Evers compared the incident to others where outrage has erupted over excessive use of force.

Now, Trump is attempting to reclaim the high ground with an emphasis on restoring the economy and getting America back to work.

But the sunny tone is already getting overshadowed by his usual lurid claims that Democrats want to take away Americans’ firearms, unleash anarchy in the streets, encourage mass illegal immigration, and repress religious freedom.

Both Koreas on high alert as typhoon approaches peninsula 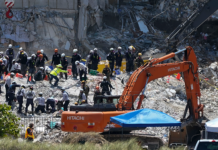