RABAT (Reuters) – An Islamic State cell broken up last week planned to attack Casablanca and its port, but a Syrian militant who assisted the group remains at large, the head of Morocco’s BCIJ security agency said on Monday.

The group had targeted economically sensitive sites both in the city of Casablanca and offshore, said Abdelhak Khiame, adding that the jihadists, all aged between 19-27, were radicalized online.

Khiame said the cell was probably the last to pledge allegiance to Islamic State leader Abu Bakr al-Baghdadi before he was killed on Saturday in a U.S. special forces raid in northwestern Syria.

Police said on Friday they had arrested seven suspected militants near Casablanca and in the northern areas of Ouazzane and Chefchaouen in possession of firearms, bomb-making material, an inflatable boat, diving and navigation tools.

“The leader of the cell had attempted to join IS in the Sahel but failed,” he said, referring to the area stretching along the southern fringe of the Sahara across West Africa.

The global jihadist group had then instructed him to prepare attacks inside Morocco instead and an unnamed Syrian had provided him with logistical help,” Khiame said. “The weapons seized originated from the Sahel region,” he added.

Compared with other North African countries, Morocco has been largely insulated from Islamist militant attacks. Its most recent took place in December 2018, when militants loyal to Islamic State killed two Scandinavian tourists. 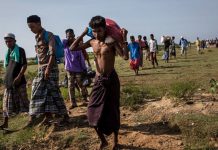