Netherlands striker Robin van has been ruled out of the World Cup qualifier against Bulgaria in Amsterdam on Monday.

It was the 34-year-old’s first game for his country in almost two years.

The Netherlands, World Cup runners-up in 2010 and third in 2014, must beat Bulgaria to stand any chance of keeping alive their slim hopes of qualifying for the 2018 finals. 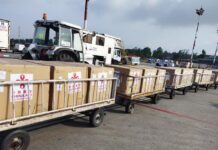 Over 809 Thousand Doses Of Vero Cell Brought In From Beijing