QUITO (Reuters) – At least 24 people died and another 19 were injured when a bus from Colombia overturned on a stretch of road into Ecuador’s capital Quito known as the “curve of death”, the emergency services said on Tuesday.

The bus also carried Venezuelan travellers, according to Ecuadorean police.

The accident occurred on the Pifo-Papallacta road, considered one of Ecuador’s most dangerous.

Authorities have not yet been able to determine the cause of the accident, but said that it hit a truck and overturned, hitting houses on the stretch of road known as “the curve of death”.

Identification of bodies has begun and injured passengers, including several hurt seriously, were taken to hospitals in Quito, according to firefighters.

Ecuadorean roads are notoriously dangerous and bus accidents occur frequently due to high speeds and mechanical failures of the buses. 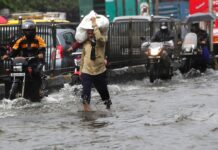 A massive plastic-cleanup device invented by a 25-year-old may finally be...