·Editor focused on markets and the economy

During a volatile race in which oddsmakers have plowed over $1 billion into speculating on the eventual winner of the Oval Office, betting markets continue to give the former vice president the inside track, while Trump’s chances of being reelected appear less probable.

Smarkets investors give Biden a nearly 2-in-3 chance (65%) to be inaugurated, while a Real Clear Politics average shows similar odds, reflecting the former VP’s formidable lead in public opinion polls.

Yet Trump is far from out of the race, as Smarkets found twice as many bets backing the incumbent than his challenger, and many investors are prepared for a contested result.

In a potentially more ominous sign, however, bettors now anticipate Biden’s coattails will create a solid Democratic majority in both houses of Congress.Several swing states the president won in 2016 are now trending in favor of Biden, according to Bookies.com data, solidifying the “Blue Wave” scenario that would clear a path toward a Senate majority that could unleash a wave of spending on key projects — and potentially higher taxes.

“We see fiscal policy as the most critical area to watch, as it has been helping to sustain the economy through the COVID shock,” BlackRock noted in an extensive analysis released on Monday.

The firm has calculated risks under three separate scenarios: A Trump reelection; a Biden presidency with a fully Democratic Congress, and a Biden win with a Senate that stays GOP

“The two Biden victory scenarios look very different through this fiscal lens, in our view,” according to BlackRock.

“We believe a Democratic sweep could pave the way for a new round of large-scale fiscal stimulus and boost spending on clean energy, transport and housing,” the firm wrote.

“It may also bring higher taxes for companies and the wealthy. A Biden win with a Republican-controlled Senate would likely lead to much less fiscal stimulus, little public investment and no major tax changes,” BlackRock added.

However, bettors, most of whom never predicted Trump’s shock win in 2016, are also positioned for the unexpected.

“With 60% of the money in our Next President market going on Trump, and more than double the number of users backing him compared to Biden, there is a clear view from the majority of users that the president could cause an upset,” said Smarkets Head of Political Markets Sarbjit Bakhshi.

“However, the average amount a user bets on Biden is double the amount placed on Trump, suggesting those who are backing the former VP to win next week are more confident than those taking a chance on Trump,” he added. 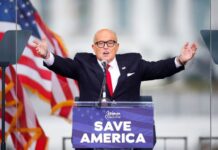 Trump may turn to Giuliani again to defend against impeachment