The Commonwealth Scientific and Industrial Research Organisation (CSIRO) announced it would undertake a five-year survey of the NT’s Victoria River in an attempt to shed light on the behaviour and breeding of sawfish, Xinhua news agency reports.

A preliminary survey of the waterway by the CSIRO and indigenous rangers resulted in the capture of 25 dwarf and large tooth sawfish (pic) as well as the first evidence of endangered spear tooth sharks and northern river sharks in the river.

Sawfish are extinct in 40 per cent of the countries they once lived in but healthy populations still exist in tropical northern Australia.

They are one of the world’s largest species of fish, growing up to seven metres in length and weighing up to 1000kg.

“The biggest I’ve seen is only five metres, and you feel like you’re looking back four million years when you see something that size, and so alien-looking with that big saw on its body.

“All the things going on in northern Australia are a threat to them… it’s nice to be able to try and find out more about a species and hopefully save them from going extinct.”

Because sawfish populations are so low and they take 15 years to reach sexual maturity, researchers have never been able to properly study their breeding habits.

“They may have as few as six pups every two years, or they may have 12 pups every year, but we don’t know, and that’s some of the information we’re trying to find out with the surveys,” Pillans said. -Bernama 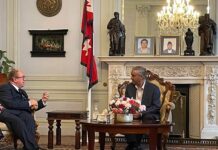 Courtesy Call Between PM Deuba And Members Of House Of Lords... 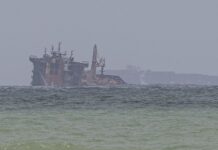