(Reuters) – All elite soccer matches in England, including the Premier League, Football League (EFL) and Women’s Super League (WSL), were suspended until April 4 on Friday due to the coronavirus pandemic, English soccer’s governing bodies said.

“Following a meeting of shareholders today, it was unanimously decided to suspend the Premier League with the intention of returning on April 4,” the Premier League, Football Association (FA), EFL and WSL said in a joint statement.

The decision was taken after Arsenal manager Mikel Arteta and Chelsea winger Callum Hudson-Odoi tested positive for coronavirus. Everton had announced that their entire team was in self-isolation but later clarified that just one player was in that situation.

“Above all, we wish Mikel Arteta and Callum Hudson-Odoi speedy recoveries, and everyone else affected by COVID-19,” Premier League Chief Executive Richard Masters said.

“In this unprecedented situation, we are working closely with our clubs, Government, The FA and EFL and can reassure everyone the health and welfare of players, staff and supporters are our priority.”

The Premier League said it aims to reschedule the affected fixtures but is unsure when action will be able to resume.

Christian Purslow, chief executive of Premier League club Aston Villa, said after the meeting that he backed the decision to suspend the league, but added it was unclear if games would resume on April 4.

The Football Association said England’s friendly internationals against Italy and Denmark at Wembley on March 27 and 31 respectively will not take place.

The men’s and women’s FA Cup competitions have also been suspended.

The EFL, which administers the three professional divisions below the Premier League, with 72 clubs, said in a statement that the situation will be kept under “constant review”.

“This action… has been taken due to the increasing numbers of clubs taking steps to isolate their players and staff because of the COVID-19 virus,” the EFL said.

The British government has not banned large public gatherings at this stage in its response to the crisis, but the EFL said it was the right moment to activate its own plans.

“Whilst the EFL Board has continued to take the advice and guidance offered by the Government and its health advisors, emerging developments mean now is the time to implement football’s contingency plans in response to the crisis,” it said.

“This decision has not been taken lightly, but the EFL must prioritise the health and well-being of players, staff and supporters while also acknowledging the Government’s national efforts in tackling this outbreak.”

He said it was “eye-catching” to order the cancellation of mass gatherings such as sports events, but that the chances of contracting the disease at games was limited.

He told the BBC: “Mass gatherings do have some impact, it is not that they don’t do anything if you stop them. But they are very much more minor than the other ones.

“The most likely place you are going to get an infection from is a family member, a friend, someone very close in a small space, not in the big space,” he said. 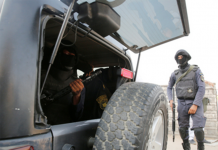