(Reuters) -European Union member states have agreed on a fourth package of sanctions against Russia following its invasion of Ukraine, the office of the French EU presidency wrote on Twitter on Monday.

The details of the sanctions were not disclosed, but the French presidency said Russia’s “most-favoured nation” trade status would be revoked.

This could open the door to the bloc banning or imposing punitive tariffs on Russian goods and putting Russia on a par with North Korea or Iran.

Sanctions were set to include an import ban on Russian steel and iron, an export ban on luxury goods including cars worth more than 50,000 euros ($55,000), and a ban on investments in oil companies and the energy sector, according to diplomatic sources.

They would also add Chelsea football club owner Roman Abramovich and 14 others to the EU list of sanctioned Russian billionaires, diplomats said earlier in the day.

The latest sanctions will be formally in place once they have been published in the EU’s official journal, which will follow soon. 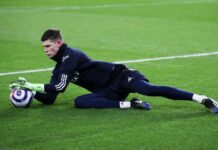