“EU is assisting Ukraine and NGOs in gathering necessary evidence for pursuit in international courts.”

Michel added that “further EU sanctions and support are on their way”.

Evidence has emerged of possible civilian killings around Kyiv as the Russian army has pulled back in the face of ferocious resistance from Ukrainian forces.

In the ravaged city of Bucha, just outside the Ukrainian capital, the bodies of nearly 300 civilians were found in mass graves after Russian troops withdrew, local officials said.

AFP reporters saw at least 20 bodies, all in civilian clothing, strewn across a single street. One had his hands tied behind his back with a white cloth, and his Ukrainian passport left open beside his body.

The EU has imposed several waves of punishing sanctions on Moscow over its invasion of Ukraine in an unprecedented Western barrage that has battered Russia’s economy.

But the 27-nation bloc has stopped short of imposing an embargo on the Kremlin’s key oil and gas exports as some member states remain too reliant on Russian fossil fuels to cut the cord.

Dozens of Afghan soldiers killed in attack on base last week 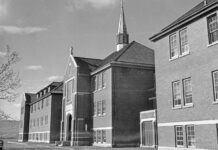 Remains of 215 children found at former indigenous school site in...