WASHINGTON (Reuters) – President Donald Trump said on Tuesday he was not concerned that he could be impeached and that hush payments made ahead of the 2016 election by his former personal attorney Michael Cohen to two women did not violate campaign finance laws.

“It’s hard to impeach somebody who hasn’t done anything wrong and who’s created the greatest economy in the history of our country,” Trump told Reuters in an Oval Office interview.

“I’m not concerned, no. I think that the people would revolt if that happened,” he said.

Federal prosecutors in New York said last week that Trump directed Cohen to make six-figure payments to two women so they would not discuss their alleged affairs with the candidate ahead of the 2016 presidential election.

They said the payments violated laws that stipulate that campaign contributions, defined as things of value given to a campaign to influence an election, must be disclosed, and limited to $2,700 (2,121.31 pounds) per person.

Democrats said such a campaign law violation would be an impeachable offence, although senior party leaders in Congress have questioned whether it is a serious enough crime to warrant politically charged impeachment proceedings.

Impeachment requires a simple majority to pass the House of Representatives, where Democrats will take control in January. But removal of the president from office further requires a two-thirds majority in the Senate, where Trump’s fellow Republicans hold sway.

Cohen is scheduled to be sentenced on Wednesday in New York for his role in the payments to the two women – adult film actress Stormy Daniels and former Playboy model Karen McDougal. Trump has denied having affairs with them.

Earlier this year, Trump acknowledged repaying Cohen for $130,000 paid to Daniels, whose real name is Stephanie Clifford. He previously disputed knowing anything about the payments.

Trump has slammed Cohen for cooperating with prosecutors, alleging that the lawyer is telling lies about him in a bid to get a lighter prison term. He has called for Cohen to get a long sentence and said on Tuesday his ex-lawyer should have known the campaign finance laws.

“Michael Cohen is a lawyer. I assume he would know what he’s doing,” Trump said when asked if he had discussed campaign finance laws with Cohen.

Asked about prosecutors’ assertions that a number of people who had worked for him met or had business dealings with Russians before and during his 2016 presidential campaign, Trump said: “The stuff you’re talking about is peanut stuff.”

He then sought to turn the subject to his 2016 Democratic opponent.

“I haven’t heard this, but I can only tell you this: Hillary Clinton – her husband got money, she got money, she paid money, why doesn’t somebody talk about that?” Trump said.

World at risk of heading towards irreversible ‘hothouse’ state 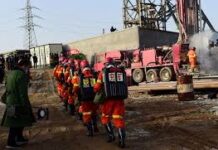