By TRN Online, Kathmandu, June 19: A team of experts is going to Melamchi of Sindhupalchowk today to find out the possible reason behind the landslide and flood in the Melamchi river.

The National Disaster Risk Reduction & Management Authority (NDRRMA) said that the experts’ team is set to conduct a field investigation to find out the reason behind the unexcepted floods in Melamchi though the excessive rainfall was not taken place.

Chief Executive of the Authority Anil Pokharel told The Rising Nepal Online that a team comprised flood and landslide experts, the Department of Irrigation, Department of Mines and Geology, and Department of Hydrology and Meteorology is going to Melamchi.

It is suspected that the flood was triggered after the river blocked due to landslides in the upper part of the river. 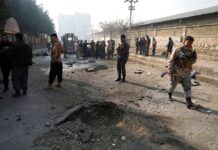