WASHINGTON (Reuters) – More than half a dozen committees of the U.S. Congress are investigating President Donald Trump, who is refusing to cooperate with most of them since the April 18 release of the Mueller report on Russian interference in the 2016 U.S. presidential election, setting up a likely court battle.

The clash between Trump and the Democrats who lead the House of Representatives committees intensified after Trump framed Special Counsel Robert Mueller’s findings as an exoneration, though Mueller neither charged nor exonerated the president.

The report, in the view of Democrats, provided plentiful leads for their further inquiries into ties between Moscow and the 2016 Trump campaign, as well as Trump’s subsequent efforts to stifle the long-running Mueller probe.

Committees are also looking into Trump’s still undisclosed taxes, potential conflicts of interest involving the sprawling business interests he has not divested since taking office, and other aspects of his turbulent presidency.

With the 2020 election campaigns underway and casting both sides’ efforts in an increasingly partisan light, here are the key congressional committees involved.

The committee’s Democratic chairman, Jerrold Nadler, is an old foe of Trump, going back years to a fight between the two New Yorkers over a large Trump real estate project in Manhattan.

Nadler’s panel has subpoenaed the Justice Department seeking the full, unredacted Mueller report and underlying evidence, as well as former White House counsel Don McGahn to testify in May.

Nadler and Justice Department officials are at odds over whether Attorney General Barr will appear before his committee to discuss Mueller’s report.

Judiciary Committee investigators are also focused on contacts Trump’s campaign had with Russia during the 2016 presidential race. Any effort to impeach Trump would likely begin in the committee.

In a book he published in 2000, Trump called Nadler “one of the most egregious hacks in contemporary politics.”

The Senate Judiciary Committee was the first panel to question Barr after the release of the Mueller report.

Barr on Wednesday defended his decision to clear Trump of criminal obstruction of justice by attempting to impede Mueller’s Russia inquiry and criticized Mueller for not reaching a conclusion of his own on the issue.

Barr was asked about findings that Trump directed then-White House Counsel McGahn to ask the department’s No. 2 official, Rod Rosenstein, to fire Mueller over the special counsel’s alleged conflicts of interest. McGahn told Mueller’s investigators that he refused to carry out the president’s request.

On April 2, the committee voted to subpoena Carl Kline, a former White House official, over a probe into security clearances granted by the administration.

The White House said it told Kline to ignore the committee’s subpoena. Cummings said the panel will soon vote on whether to hold Kline in contempt of Congress over the matter.

Trump has filed an unprecedented lawsuit attempting to squash a committee subpoena seeking his past financial records from Mazars USA, an accounting firm long used by Trump.

The administration has rebuffed a committee request for an interview with John Gore, an official who was involved in a decision to include a citizenship question in the 2020 census.

Also, the White House has refused a request from the panel for Trump’s top immigration aide Stephen Miller to testify.

Unlike presidents in recent decades, Trump has refused to disclose his returns, which committee Democrats want to obtain and review. Committee Republicans argue the committee’s request oversteps its authority.

Treasury Secretary Steven Mnuchin did not meet an April 23 committee deadline for handing over the returns and said that a “final decision” on the request would be made by May 6.

The committee’s chief, whom Trump has mocked as “sleazy” and “little pencil neck Adam Schiff,” is examining Russian influence in U.S. politics and whether any foreign countries hold leverage over Trump, his family, his business or his associates.

Like other panels, Schiff’s has expressed an interest in having Mueller testify about his findings.

In late March, Trump adviser Jared Kushner, the president’s son-in-law, made a second appearance before the panel, according to congressional sources. Topics discussed in the closed-door sessions were not made public.

Democratic Chairwoman Maxine Waters, whom Trump has also frequently mocked, is leading a probe into Trump’s ties with Deutsche Bank AG, one of the world’s largest financial institutions, as well as potential Russian money laundering through the bank. The committee oversees the financial services industry including banks.

Waters has said the House should impeach Trump. 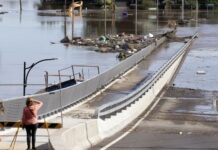 Pompeo in quarantine after exposure to Covid-positive person

More than 98,000 without power in U.S. Southeast as Florence approaches