The Food and Drug Administration has given emergency approval to a Trump administration plan to distribute millions of doses of anti-malarial drugs to hospitals across the country, saying it is worth the risk of trying unproven treatments to slow the progression of the disease caused by the novel coronavirus in seriously ill patients.

There have been only a few, small anecdotal studies showing a possible benefit of the drugs, hydroxychloroquine and chloroquine, to relieve the acute respiratory symptoms of covid-19 and clear the virus from infected patients.

Health experts warn the drugs’ well-known side effects could become commonplace with wide use. In particular, they say, patients with existing heart problems or taking certain drugs, such as anti-depressants that affect heart rhythm, are at risk of a fatal episode. Experts recommend screening before the drugs are prescribed to prevent drug-related deaths.

“The concern really is if we’re talking millions of patients, then this issue of drug-induced sudden cardiac death is absolutely going to rear its ugly head,’’ said Michael Ackerman, a pediatric cardiologist and professor at the Mayo Clinic College of Medicine and Science, who last week co-authored a key paper about the risks in response to the surge in the drugs’ use.

Long-term use of the drugs also is associated with a chance of developing a form of vision loss called retinopathy, but the use of the drugs to fight virus in an infected patient is only for a few days.

The FDA’s emergency authorization does not cover longer-term use of the drugs to prevent the coronavirus infection, although doctors have been prescribed the drugs “off label” for weeks in response to the pandemic.

With no established treatments available, the FDA said in an approval letter Saturday that, essentially, trying the anti-malarial drugs was worth a shot. It cited the actions of other countries that adopted the drugs as a coronavirus treatment and the limited laboratory tests and clinical experience that may show benefit.

“It is reasonable to believe that chloroquine phosphate and hydroxychloroquine sulfate may be effective in treating covid-19,” the FDA’s chief scientist, Denise Hinton, wrote in the letter granting emergency approval.

Hinton’s letter did not cite specific studies or evidence the FDA used to support the decision.

Another study, in China, found that hydroxychloroquine performed no better than standard treatment for the coronavirus. Larger, more rigorous clinical trials of the treatments are underway around the world and in the United States.

Novartis and Bayer are contributing millions of doses of the drugs to the federal government, which will distribute them via the Strategic National Stockpile. The extraordinary action came at the request of the Biomedical Advanced Research and Development Authority, a division of the Department of Health and Human Services.

The FDA earlier this month approved a plan to distribute hundreds of thousands of doses of the drugs to hospitals in New York, which has emerged as the epicenter of the pandemic in the United States.

Trump has repeatedly stated his belief that the drugs will work to treat coronavirus. One of his top advisers on the government response, Anthony S. Fauci, chief of the National Institute of Allergy and Infectious Diseases, has stated the public should view the drugs with caution because of the paucity of evidence.

In a news release Sunday night announcing the unprecedented action, Health and Human Services Secretary Alex Azar hailed Trump for “taking every possible step to protect Americans from the coronavirus and provide them with hope.”

Azar cited the president’s “bold leadership” for making possible the donations of pills by Novartis’s generic subsidiary, Sandoz, as well as Bayer.

But the speed with which the FDA is moving has raised concerns about the limited evidence, even under the looser standards permitted under an “emergency use authorization,” which is the regulatory mechanism the agency used in this case.

“You need a degree of scientific evidence. It’s in the guidance. You can’t just bless it,’’ said consultant Lewis Schrager, a physician who was a medical reviewer and clinical branch chief at the FDA from 2002 to 2013.

The surge in demand has sapped supplies of hydroxychloroquine, which has been used to treat lupus and rheumatoid arthritis. Patients suffering from those diseases have been unable to get their prescriptions filled in some parts of the country because of the run on the drugs as well as hoarding, according to health experts.

Ackerman said in an interview that identifying at-risk patients for heart problems caused by the drugs will be a crucial mission for front-line health-care providers. About 10 percent of the population is at risk of a side-effect of prolonging the split-second interval between electrical recharges of the heart, he said. One percent of the population is at especially high risk, he said.

If the interval reaches 500 milliseconds, the heart gets close to “getting tripped up and spiraling out of control” in an arrhythmia that can lead to sudden heart attack and death, he said. Not only do the anti-malarials cause that interval to lengthen, so does azithromycin, the antibiotic sometimes used in combination with hydroxychloroquine to treat the coronavirus, said Ackerman.

“If we’re treating a hundred people, then this is a very rare side effect that will never happen,” he said. “If we’re talking 1 million, and one percent are at real risk of this tragic side effect, that is 10,000 people.”

The frenzy surrounding the drugs’ potential has created a “wild West atmosphere” on social media that threatens to eclipse the dangers, he added. Some medical providers are aware of the side effects, while many others are not, he added.

The FDA posted on its website informational fact sheets for providers warning of side effects and dangers to patients with heart disease, low potassium and other factors. The FDA said hospitals and doctors prescribing the drugs will be required to report negative side effects to the agency.

Serena battles past Sakkari to reach US Open quarters

Macron faces ghost of ‘Yellow Vest’ past in Christmas run-up 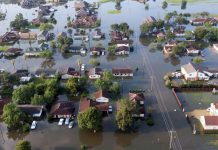 US President seeks $7.85bn in initial aid for Harvey relief

‘People who love life and music’ – dance parties return to...