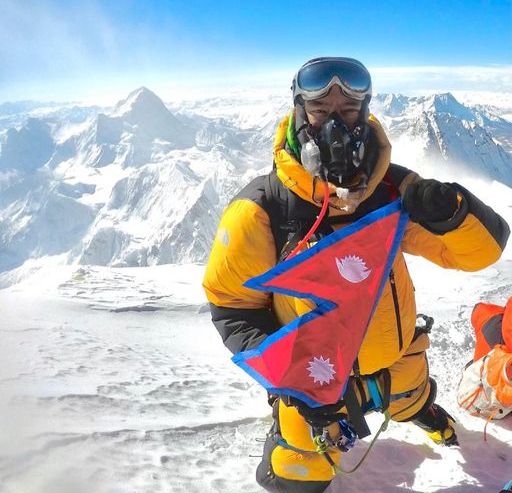 By A Staff Reporter, Kathmandu, May 17: Keshav Prasad Gauchan has become the first helicopter pilot from Nepal to climb Mt. Everest.

The 32-year-old, who also goes by the name Sobit Gauchan, made it to the top of the world’s highest peak on Tuesday at 7.56 am, according to the information released by the expedition organising company Seven Summit Treks Pvt. Ltd. on Sunday.

Gauchan has previously worked with Air Dynasty and Altitude Air and is currently the operation director of Heli Everest, a private helicopter tour and transportation company.

The two Sherpas are also affiliated with Heli Everest. Tashi Lakpa Sherpa is the company’s marketing director and Phurba Tsering Sherpa is its promotion director.

Of the three, Tashi Sherpa is also associated with Seven Summit Treks and holds the world record for being the youngest person to scale Sagarmatha (Mt. Everest) without supplementary oxygen.

He was also the team leader for the Bahraini royal expedition team that successfully climbed Sagarmatha last week on the same day Gauchan reached the mountaintop.

Meanwhile, Phurba Sherpa successfully scaled Sagarmatha in his first attempt. “I am confident that their grand success will be the first of many proud moments for the whole Heli Everest family,” said Fur Gelje Sherpa, managing director of Heli Everest.Keshav Prasad ‘Sobit’ Gauchan on top of Sagarmatha.