(Reuters) – American teenager Cori ‘Coco’ Gauff has captured the hearts of fans with her dream run to Wimbledon’s fourth round but a stern examination awaits in the form of seventh seed Simona Halep on Monday.

The 15-year-old’s popularity has soared off the charts in a memorable week at the All England Club, with organisers also recognising her potential to grab attention and giving her a Centre Court match-up in the third round.

Gauff did not disappoint, saving two match points to beat Polona Hercog 3-6 7-6(7) 7-5, and similarities with compatriot Jennifer Capriati, who broke into the top 10 at the age of 14, became harder to ignore.

Although Capriati struggled with fame at a young age, Gauff appears to have both feet firmly planted on the ground, drawing praise from 23-times Grand Slam winner Serena Williams who has been impressed by her maturity.

“Then you have Coco… (who is) on a different level. She’s totally capable and ready. Not every 15-year-old is the same.”

“I was terrible at 15, couldn’t be on a court for longer than an hour-and-a-half. I would walk away,” Federer said.

“She seems developed, she’s moving great. It’s one of her great strengths. And her mind, which is not usually the case when you look at younger players.”

Gauff’s success has been put down to her on-court thinking and ever-changing strategy, an inherent ability to try different things when the going gets tough. But in former world number one Halep, she faces a potentially daunting task.

Halep’s baseline play could prove difficult for Gauff to overcome as some of her forehand returns have been punished in the first week, while the Romanian’s backhand is a force to be reckoned with.

Halep said she had never watched the teenager play before and had expected Hercog to go through but Gauff has already done her homework on the 2018 French Open champion.

“I watch her a lot,” Gauff said. “I’ve never… practised with her. I don’t know how the ball would feel when I actually play but I’m really familiar (with) how she plays just from watching her a lot.”

While Martina Hingis and Monica Seles won Grand Slams at the age of 16, the level-headed Gauff has paid little attention to suggestions that she is the next big thing in women’s tennis.

“I don’t really believe in fate and destiny… you can change your own world,” she said. “I take it just one tournament at a time.” 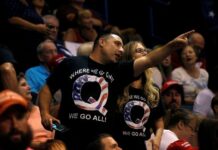 ‘No plan, no Q, nothing’: QAnon followers reel as Biden inaugurated