GAZA (Reuters) – A 13-storey residential tower in the Gaza Strip was hit by an Israeli air strike on Tuesday night and soon after collapsed, witnesses said, amid a surge in fighting between Israel and Gaza militants.

The tower houses an office that is used by the political leadership of Gaza’s Islamist rulers Hamas.

Residents of the tower and people living nearby had been warned to evacuate the area around an hour before the air strike, according to witnesses. It was not immediately clear if the building had been fully evacuated, or if there were casualties. 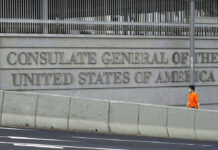 ‘No more camps,’ Colombia tells Venezuelans not to settle in tent...

Reasons to Start Putting Oil ( Almond Oil,Olive oil) in Your...