HANAU, Germany (Reuters) – A suspected right-wing extremist shot dead nine people, some of them migrants from Turkey, in an overnight rampage through a German city before killing himself, officials said.

The attack late on Wednesday targeted two shisha bars in Hanau, a town close to Frankfurt in the western state of Hesse.

Police chased a car used to leave the scene of one shooting to its owner’s address, where they found the bodies of a 43-year-old German man and his 72-year-old mother, Hesse interior minister Peter Beuth said.

Federal prosecutors said they had taken charge of the case due to indications that the attack had an extremist motive, and newspaper Bild said the suspect had expressed far-right views in a written confession.

In shisha bars, customers share flavored tobacco from a communal hookah, or water pipe. In Western countries, they are often owned and operated by people from the Middle East or South Asia, where use of the hookah is a centuries-old tradition.

Some of those killed were of Turkish origin, a spokesman for the Turkish presidency said. “We expect German authorities to show maximum effort to enlighten this case. Racism is a collective cancer,” Ibrahim Kalin said on Twitter.

German magazine Focus cited security sources as saying many of the victims had an immigrant background.

Germany’s political landscape has been polarized in recent years, with a wave of immigration and a slowing economy helping to fuel support for extremist groups at both ends of the spectrum.

In October, an anti-Semitic gunman opened fire outside a German synagogue on Yom Kippur, the holiest day of the Jewish year, and killed two people as he livestreamed his attack.

Authorities have banned some far-right groups endorsing violence, while Germany’s post-war centrist political consensus has been undermined by growing support for the anti-immigrant Alternative for Germany (AfD) party, notably in the former-Communist eastern states.

Police said there were no indications that other suspects were involved in the Hanau attack.

They said investigations into the identity of gunman and victims were ongoing and, Beuth said, whether any letters of confession had been written.

The minister said the suspect was in legal possession of arms and was a sports marksman, and Bild said ammunition and gun magazines were found in the suspect’s vehicle.

Can-Luca Frisenna, whose father and brother run one of the two bars attacked, said he rushed there after learning about the shooting.

“I heard my father was affected and my little brother, they run the kiosk, I don’t have much to do with it,” said Frisenna. “But then I saw them both – they were horrified and they were crying and everything. So everyone was shocked.”

At one of the bars on Thursday morning, forensics police in white overalls inspected the crime scene, cordoned off close to Hanau’s historic market place. Nearby, traffic flowed as normal and commuters waited for buses.

Kadir Koese, a 38-year businessman who runs a bar opposite one of those attacked, described hearing shots being fired.

“There was a guy lying on the sidewalk, shot in the head, I think. My neighbor said ‘get down’. The police came quickly,” he said.

Government spokesman Steffen Seibert tweeted: “Deep sympathy goes out to the families concerned, who are mourning the loss of their dead. With the injured, we hope they will soon recover.”

European Commission President Ursula von der Leyen, who is German, said in a tweet that she was deeply shocked by the shooting and that she mourned with the families and friends of the victims. 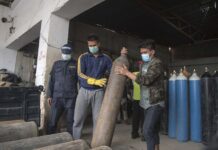 MoHP To Distribute Oxygen Cylinders In Valley From Today